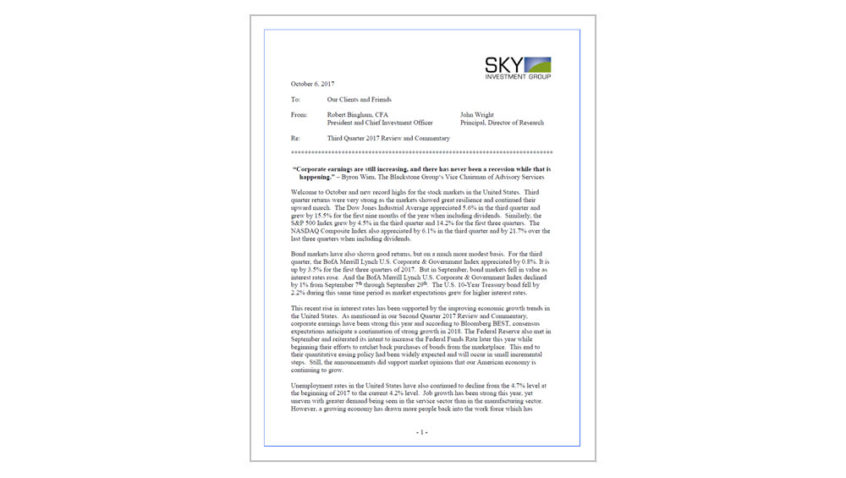 “Corporate earnings are still increasing, and there has never been a recession while that is happening.”
– Byron Wien, The Blackstone Group’s Vice Chairman of Advisory Services

Bond markets have also shown good returns, but on a much more modest basis.  For the third quarter, the BofA Merrill Lynch U.S. Corporate & Government Index appreciated by 0.8%. It is up by 3.5% for the first three quarters of 2017.  But in September, bond markets fell in value as interest rates rose.  And the BofA Merrill Lynch U.S. Corporate & Government Index declined by 1% from September 7th through September 29th.  The U.S. 10-Year Treasury bond fell by 2.2% during this same time period as market expectations grew for higher interest rates.

This recent rise in interest rates has been supported by the improving economic growth trends in the United States.  As mentioned in our Second Quarter 2017 Review and Commentary, corporate earnings have been strong this year and according to Bloomberg BEST, consensus expectations anticipate a continuation of strong growth in 2018. The Federal Reserve also met in September and reiterated its intent to increase the Federal Funds Rate later this year while beginning their efforts to ratchet back purchases of bonds from the marketplace.  This end to their quantitative easing policy had been widely expected and will occur in small incremental steps.  Still, the announcements did support market opinions that our American economy is continuing to grow.

Unemployment rates in the United States have also continued to decline from the 4.7% level at the beginning of 2017 to the current 4.2% level.  Job growth has been strong this year, yet uneven with greater demand being seen in the service sector than in the manufacturing sector.  However, a growing economy has drawn more people back into the work force which has furthered an increase in the level of consumer spending.  So, by most accounts, the world’s largest economy is doing well, and these improving trends have supported growth both in the United States and overseas.  The gain in stock prices reflects investors’ appreciation of these strong economic fundamentals.

Yet these improving trends were interrupted by the vicious hurricanes that struck Texas, Florida and Puerto Rico in September.  This hurricane season has been the worst since the 2004 and 2005 seasons when Louisiana and Florida were hit so hard.  The season had been predicted to be difficult because of warm waters and the changing wind patterns that cross the globe.

The El Niño and La Niña wind patterns that have vacillated across the Pacific Ocean for centuries do directly impact weather patterns in both North America and the Atlantic Ocean.  And the strong warm winds of El Niño ended in the spring of 2017.  Consequently, the strong westerly winds that had helped reduce the strength and direction of the Atlantic hurricanes the past few years have not provided much mitigating help this year.

As a result, hurricane “Harvey” lambasted Houston, “Irma” shellacked parts of Florida and “Maria” devastated Puerto Rico.  Most unfortunately, the loss of life and property cannot be undone.  These calamities will all combine to reduce the level of economic growth in this year’s third quarter.  Texas oil refiners had to stop their production for a few days which slowed down production schedules and increased plastic resin costs for companies like Newell Brands, the maker of Rubbermaid, Graco and Sharpie products.

The violent waves off the Atlantic seaboard also interrupted shipping deliveries into many of the eastern seaports.  Accordingly, gasoline costs increased in many parts of the United States during September.  Yet most of the impacts from these storms are expected to be temporary and to be overcome by growth elsewhere.  The rebuilding efforts following these hurricanes have also increased demand for new cars and helped build demand for construction, retail and healthcare services.

Obviously, time will tell what growth levels do prevail, and how that growth impacts future interest rates.  But as October began, the U.S. Government’s Bureau of Economic Analysis predicted that the third quarter’s gross domestic product would grow at a 3.1% rate, which would be the second quarter in a row of better than 3% annualized growth.  The ongoing growth of corporate profits and the increasing level of new orders for manufactured goods and services will also help support this trend.

Can these supporting trends keep the stock market from undergoing a correction?  Most likely not.  Market multiples are rich, and stock prices never travel in only one direction.  We will periodically see market corrections and a recalibration of value, and we are due for one now. That said, market reassessments happen all the time, even in rising markets, and sometimes are more subtle and effective than fully noticed.

For instance, as one sector of the market gets expensive, investors often rotate out of that sector and move into other sectors.  After President Trump’s election last November, financial stocks performed exceptionally well as investors anticipated stronger economic growth and higher interest rates.  Investors then rotated out of financial stocks and into technology stocks.  Technology stocks then sold off and ceded market leadership to stocks in the energy, telecom and utility sectors during the third quarter.  All the while in 2017, market indices have continued to reach new highs as market leadership shifted and rotated through multiple sectors.  This rotation has helped provide some balance to the stock market during the first nine months of this year. It has also provided investors with opportunities to acquire good companies at reasonable prices despite the steady advance of the broad market.

At the end of the third quarter, the small cap sector of the stock market out-performed most other indices and brought new leadership to the stock market.  The Russell 2000 Index, a benchmark for America’s 2,000 small-cap companies, appreciated by 10% from August 18th through September 29th.  This strong move more than made up for the 6.3% decline in the Russell 2000 Index from July 25th through August 18th and its flat performance for the previous eight months of 2017.  Only in September did this small cap sector of the market exhibit fresh leadership for the rest of the stock market.

This out-performance by the Russell 2000 may reflect renewed confidence in economic growth rates, improved earnings prospects, or investor willingness to take on more risk. As Ben Carlson of Ritholtz Wealth Management notes, “Volatility in small caps is about 20 percent higher than the volatility in large caps.”  Whether or not such new leadership in the market will be sustained remains to be seen.  But if so, the stock market will continue to trend higher.

Now clearly, many risks still remain for the markets, not the least of which are geo-political risks such as Kim Jong Un and the prospects for war between America and North Korea.  Most Americans have forgotten that the Korean War never did end, and that a state of war has continued in Korea’s Demilitarized Zone for over 60 years.  Fortunately, Secretary of State Tillerson has restored some diplomatic back-channels through the United Nations to maintain lines of communication with North Korea.  But these steps could be insufficient.

Rising levels of interest rates could also change the comparative value of stocks, bonds and commodities for investors.  Such adjustments could generate greater volatility in the markets.  And any small increase in volatility will be widely noticed, and perhaps quickly followed, given the absence of any material market volatility this year.

Cybersecurity breaks have also continued as recent announcements from Equifax and the Securities and Exchange Commission have shown.  Unfortunately, such breaches will probably become more prevalent and should be expected.  All of us do need to remain careful and diligent with our electronic files and communications and assume that our personal communications are not secure when sent by email.

Tax law and legislative changes may also impact the markets from both a positive and negative perspective in the months ahead.  In particular, tax reform could provide a “tailwind” to earnings and the stock market’s performance during 2018.

Hence, market valuations will change; that much is certain.  The question is always, “by how much?”  While a market correction could easily occur, we still do not believe that a recession is likely in the near-term.  Consequently, we are not changing our investment strategies and do believe that any future market volatility will be manageable.

The economic growth phase which started following the 2008/09 recession continues ahead and may perhaps be expanding its breadth.  So although this business cycle may seem a bit “long in the tooth,” its slow and steady pace may lengthen its staying power.  Continued growth in corporate profits will help this trend, as will the expanding number of workers, the greater number of consumers, and the increasing demand for goods and services.  While we remain cautious about market valuations, we do believe that price changes will also create some investment opportunities.

As such, we will continue to build balanced portfolios across diverse business sectors and analyze companies’ cash flows.  Bouts of market turmoil should always be expected, but over time, high-quality portfolios of dividend paying stocks have served our clients well.  Market leadership will continually change and investors will continually readjust.  But owning the productive capacity of a growing world in the form of high-quality, dividend-paying stocks, balanced with bonds, is the best path to creating and preserving long-term wealth.

Do let us know if you have any questions and would like to visit.

Securities noted above valued as of the market close on October 5, 2017: