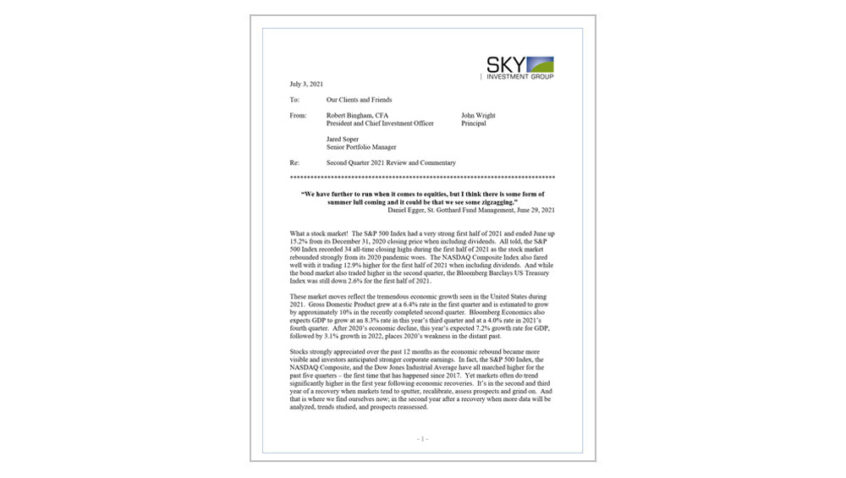 “We have further to run when it comes to equities, but I think there is some form of summer lull coming and it could be that we see some zigzagging.”
– Daniel Egger, St. Gotthard Fund Management, June 29, 2021

These market moves reflect the tremendous economic growth seen in the United States during 2021. Gross Domestic Product grew at a 6.4% rate in the first quarter and is estimated to grow by approximately 10% in the recently completed second quarter. Bloomberg Economics also expects GDP to grow at an 8.3% rate in this year’s third quarter and at a 4.0% rate in 2021’s fourth quarter. After 2020’s economic decline, this year’s expected 7.2% growth rate for GDP, followed by 3.1% growth in 2022, places 2020’s weakness in the distant past.

Stocks strongly appreciated over the past 12 months as the economic rebound became more visible and investors anticipated stronger corporate earnings. In fact, the S&P 500 Index, the NASDAQ Composite, and the Dow Jones Industrial Average have all marched higher for the past five quarters – the first time that has happened since 2017. Yet markets often do trend significantly higher in the first year following economic recoveries. It’s in the second and third year of a recovery when markets tend to sputter, recalibrate, assess prospects and grind on. And that is where we find ourselves now; in the second year after a recovery when more data will be analyzed, trends studied, and prospects reassessed.

Ryan Detrick of LPL Financial found that, since World War II, the stock market tends to be choppier with more muted gains in the second year of an economic recovery. Uncertainty is always a part of the market, and twists and turns should always be expected.

But the 2020 recession was caused by government lockdowns, school closings, and employee furloughs. Accordingly, the economy has recovered that much more quickly. Pent-up demand for both goods and services has been nearly overwhelming. And when combined with trillions of dollars of stimulus checks, plenty of money is available for future purchases. In fact, the Federal Reserve Bank of New York calculates that less than 30% of all the stimulus checks had been spent as of June, leaving 70% still available to spend.

And with the second quarter’s gross domestic product having grown at a 10% annualized rate, these corporate earnings should be good. This economic snap back is real. Witness the strong payroll data released on July 2nd.

But how much of this growth is already priced into stock prices? And will this heady growth also bring stronger than expected inflation?

Increasing inflation has certainly been a point of concern. Federal Reserve Chairman Powell has continued to argue that transitory factors are responsible for the recent higher rates of inflation. The Associated Press’ Joyce Rosenberg reported that, “Surging demand from consumers for a wide range of products during the pandemic has driven up prices for finished goods as well as raw materials, supplies and equipment.”

Indeed, price levels for lumber and other construction materials were up by well-over 15% from 2020 levels. And prices for used cars, rental cars, and computer chips all increased sharply from new bottlenecks in our economy’s supply chain. These increases were all reflected in the 5% jump in May’s consumer price levels. That spike is reflected in the adjoining graph.

But as shown in the graph, that spike was substantially lower than the inflationary rates of the 1970’s and 1980’s. More importantly, that 5% spike was off the depressed price levels of 2020, and when measured against 2019 price levels, that 5% spike declines to a 2.5% annualized rate of change. This base level effect, when combined with the surging demand for automobiles, furniture, and bicycles, exacerbated the calculated mismatch with supply and demand.

As the Carlyle Group’s Jason Thomas wrote on May 27th, “The rise in inflation doesn’t stem from booming demand associated with the reopening of bars, restaurants, concert venues and stadiums, as many have claimed. It reflects the extent to which manufacturers were caught off balance by the pandemic last year. That’s good news because the problem is temporary. As more consumer spending gets rerouted in the months ahead from durable goods such as camping gear and hot tubs to experiences like travel and live events, inflation is likely to moderate.”

For instance, the first quarter’s 38% increase in motorcycle sales was a one-time boom rather than the beginning of a new trend. The resulting inflationary pressures should ease as these supply demand mismatches rebalance.

Worker productivity numbers have also improved strongly. This spring, the Labor Department reported that nonfarm business productivity doubled to 4% from the 2% level seen from 2013 through 2019. Nonfarm labor productivity also increased 5.4% in the first quarter over 2020 fourth quarter levels. Video calls with cardiologists tend to last about 22 minutes according to Stanford Health Care’s Chris O’Dell versus one hour for in-person meetings. Tabletop technology at restaurants speeds up service, delivers more accurate orders, and increases table turnover according to Applebee’s owner, Dine Brands Global. Servers have found the tablets make it easier for them to do their jobs while helping them make more money.

As KPMG’s Chief Economist Constance Hunter said, “The pandemic shocked older people into using technology and has shocked the economy in general into adopting technology.” Business investment spending on computer equipment increased by 17% in 2020’s 4th quarter according to the McKinsey Global Institute. And in June, the Commerce Department reported that nonresidential fixed investment spending increased at an 11.7% rate in 2021’s 1st quarter, as led by growth in software and technology spending. The data also showed that “orders for nondefense capital goods, excluding aircraft, are near the highest levels for records tracing back to the 1990’s,” according to the Wall Street Journal’s Sarah Chaney Cambon.

Investment manager Gary Shilling wrote on July 1st that rising wages “should help corporate profits and contain inflationary pressures.” He calculated that “weekly wages for hospitality and leisure jobs have leaped 22% from the April 2020 bottom.” But he argues that the, “output gains vastly outran employment increases from the second to the fourth quarters of 2020… In the recreation industries, a 60.7% gain in output required just an 8% increase in jobs. The numbers were 41% and 8% in accommodations and food service and 13.5% and 2.5% in education services and health care. The airlines’ gross output rose 77.3% with only a 4.0% rise in employment.” Shilling concludes by stating, “Productivity gains are not only the key to profits but also the mortal enemy of inflation.”

Goldman Sachs has forecasted that the core consumer price index will approximate 2.3% for all of 2022, down from May’s 3.8% rate. Again, we hope this forecast proves accurate since both the stock and bond markets perform better in low inflationary climates – approximately 60% better according to Goldman Sachs.

Given these uncertainties, we believe investors should primarily own best-in-class companies. We also believe that stocks will continue to outperform bonds for the foreseeable future as interest rates trend higher. But keep an eye on corporate profit margins, as they may well dictate the market’s future direction.

Do let us know if you have any questions, and we do look forward to seeing you soon!

Securities noted above valued as of the market close on July 2, 2021: