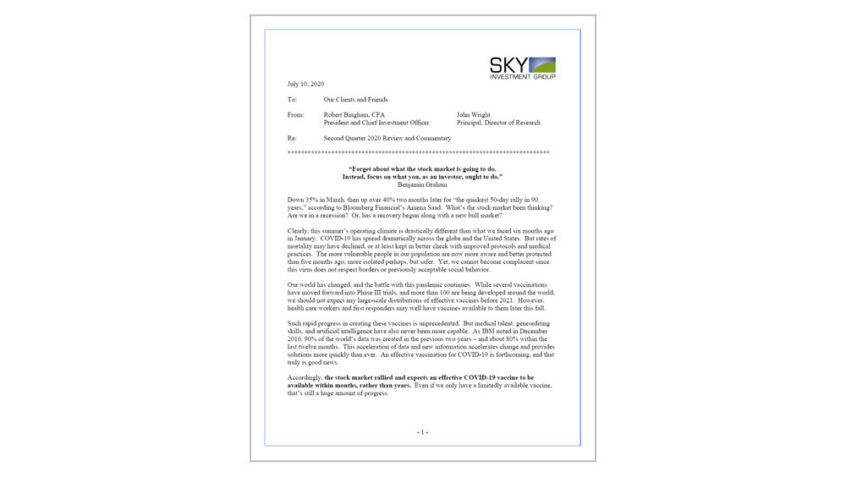 “Forget about what the stock market is going to do.
Instead, focus on what you, as an investor, ought to do.”
– Benjamin Graham

Down 35% in March, then up over 40% two months later for “the quickest 50-day rally in 90 years,” according to Bloomberg Financial’s Amena Saad.  What’s the stock market been thinking?  Are we in a recession?  Or, has a recovery begun along with a new bull market?

Clearly, this summer’s operating climate is drastically different than what we faced six months ago in January.  COVID-19 has spread dramatically across the globe and the United States.  But rates of mortality may have declined, or at least kept in better check with improved protocols and medical practices.  The more vulnerable people in our population are now more aware and better protected than five months ago; more isolated perhaps, but safer.  Yet, we cannot become complacent since this virus does not respect borders or previously acceptable social behavior.

Our world has changed, and the battle with this pandemic continues.  While several vaccinations have moved forward into Phase III trials, and more than 100 are being developed around the world, we should not expect any large-scale distributions of effective vaccines before 2021.  However, health care workers and first responders may well have vaccines available to them later this fall.

Such rapid progress in creating these vaccines is unprecedented.  But medical talent, gene-editing skills, and artificial intelligence have also never been more capable.  As IBM noted in December 2016, 90% of the world’s data was created in the previous two years – and about 80% within the last twelve months.  This acceleration of data and new information accelerates change and provides solutions more quickly than ever.  An effective vaccination for COVID-19 is forthcoming, and that truly is good news.

Accordingly, the stock market rallied and expects an effective COVID-19 vaccine to be available within months, rather than years.  Even if we only have a limitedly available vaccine, that’s still a huge amount of progress.

In the interim, the world’s governments choose to shut down their respective economies and we have entered a massive, event-driven recession.  Unemployment rates have soared, and in the United States, that rate was reported at 11.1% on July 2nd, the highest level seen in America since the 1940’s.  Yet, 4.8 million people were hired in June after nearly three million people were added to U.S. payrolls in May.  Such rapid growth in new hiring has never been seen before either.  While such growth may not be sustainable, it still reflects very strong progress.

However, this economic calamity won’t end soon, especially for those businesses and individuals in the travel and hospitality industries.  Yet steps taken by our Federal Reserve and Congress have supported the shuttered businesses and unemployed people.  Unfortunately, the steps and legislation were less than perfect, and the negative ramifications will emerge with time.  The steps did provide a bridge from the bottom of this recession to the start of a recovery.  Again, this is good news and has helped us progress.

So how long will this recession last, and how pervasive might be this recovery?  We expect the recovery to be choppy with setbacks along the way.  Some believe the severity of the economic downturn will help accelerate its recovery as pent up demand bubbles up.  People want to go to restaurants, to shop, to buy cars, to get bigger apartments, or to buy new homes.  Isolating oneself does not come naturally to most of us.  Accordingly, the reopening of cities, beaches, and the economy has been greatly embraced, and quite likely, overly so.  Recent increases in COVID-19 cases and renewed business closings will hopefully only set us back temporarily.  Clearly, we all still need to protect one another via social distancing.

These back and forths will likely continue for some time, but the credit markets are now functioning, businesses are hiring, and the economy is improving.  Home sales have been strong, and demand for services jumped to pre-recession levels in June.  Manufacturing activity has also increased.  People are beginning to live their lives again, even if we still don’t know how schools might function this fall.  But importantly, we have more knowledge now than we did last winter.  Our health care practices are better, personal protective supplies are available, and people have received unemployment checks.

Yet not everyone will be rehired, and not all businesses will reopen.  The drop in gross domestic product as a result will be dramatic across the globe.  Scars will be left on families, governments, and businesses.  Second quarter GDP is expected to have declined by 40% or more from 2019 levels.  Such a huge drop has never been seen in modern history.  The 2008/2009 recession was less immediate and occurred over an eighteen-month period.  The COVID-19 recession was orchestrated by government decree as people were told to stay at home and businesses to shut down.  The plan was to “flatten the curve” and keep our medical system from being overwhelmed by this pandemic.  No one wanted to flatten the economy.

Hence, it’s essential that economies re-open with safer operating procedures and healthier social norms.  Accordingly, economists expect GDP to bounce back by approximately 20% in the third quarter followed by 5% growth in both this year’s fourth quarter and 2021’s first quarter.

Effective vaccinations and reduced morbidity rates will also foster greater business activity.  The stock market has anticipated these positive possibilities and recovered strongly.  But as we’ve seen, setbacks have occurred, and investors should expect interruptions throughout this recovery.  A full recovery will also take about two years before 2019 levels of economic activity are reached again.  But this jagged and painful, chainsaw recovery is still greatly preferable to the second quarter’s severe contraction.

However, investors should not expect stocks to appreciate as strongly in the third quarter as they did in the second quarter.  The prospects for an economic recovery are good, but the recovery won’t be universal nor palatable for everyone.  We could also experience a double dip recession as was seen in 1980 and 1982 – unlikely in our opinion, but still a possibility.

Bankruptcy filings are also increasing, and state and local governments may have to reduce programs and personnel.  Supply chain interruptions could persist, and inflation or stagflation could appear.  Other viruses, or another pandemic, could also emerge, and COVID-19 could mutate.  But the economy could also recover and grow more quickly than anticipated.

With these many possibilities, most Wall Street analysts expect the S&P 500 Index to trade within a 2800 to 3200-point range over the next few months.  “The reality is, the second half of the year may bring a lot of choppiness to the market,” according to Schwab’s Chief Investment Strategist Liz Ann Sonders on 6/30/20.  Not many expect the stock market to retest its March lows.

“A resurgence in COVID-19 cases is unlikely to drive stocks down to the lows of just three months ago.  Federal support has likely steered the economy away from a worst-case scenario and policy makers retain significant firepower to ward off future concerns,” according to Bloomberg Financial’s Gina Martin Adams on 6/19/20.

“The Fed has done a lot to squelch volatility, but I don’t think all the volatility will be out of the market.  We won’t have a catastrophic sell-off like in March, but periodic bouts of volatility as the market tries to price in the additional impacts of rolling business shutdowns,” according to People’s United Advisors Karissa McDonough on 6/24/20.

“It would be illusory to think we can freeze and defreeze the global economy without consequences,” according to Swiss Re’s Chief Economist Jerome Jean Haegeli on 6/13/20.

Keep in mind the stock market looks more closely at the rate of change than it does at absolute numbers.  So strong revenue growth from Federal Express and other companies that support today’s stay-at-home economy are being well received.   But markets remain susceptible to changing trends and surprising headlines.

So with all the uncertainty, volatility, and many changes, we’d like to reiterate what we heard from Gary Bradshaw, a portfolio manager at Hodges Capital Management when he said on July 2nd, “The way you make money in the stock market is you buy good companies and you hold on.”

Please let us know if you have questions or would like to meet with us.

Securities noted above valued as of the market close on July 9, 2020: