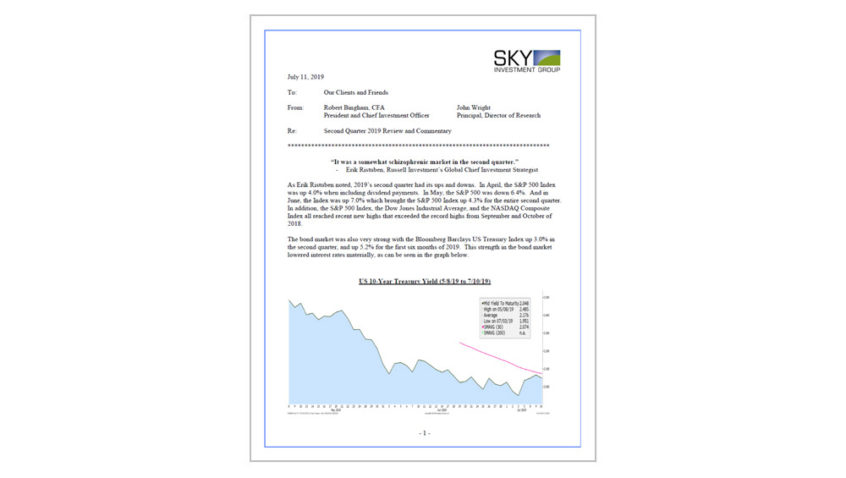 The bond market was also very strong with the Bloomberg Barclays US Treasury Index up 3.0% in the second quarter, and up 5.2% for the first six months of 2019.  This strength in the bond market lowered interest rates materially, as can be seen in the graph below. 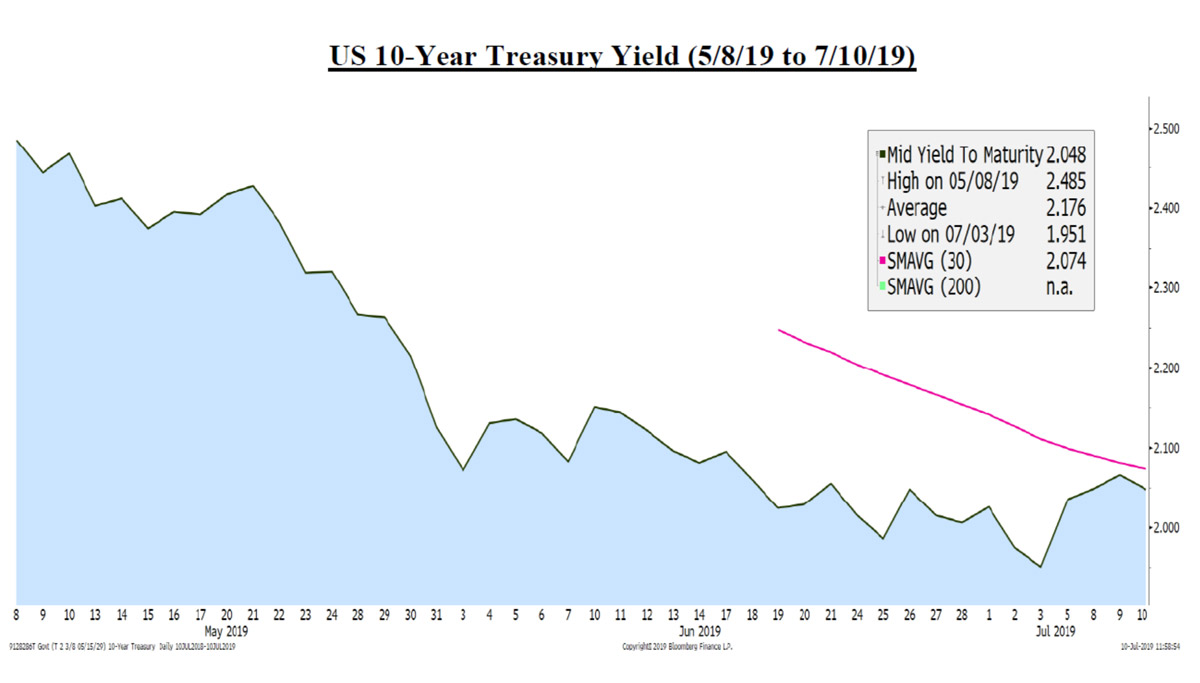 This sharp decline in interest rates was caused by many investors choosing to buy bonds instead of stocks during the last three months.  As reported, the Investment Company Institute estimated that bond mutual funds received $96.5 billion in net-inflows during the second quarter versus a net outflow of $25.1 billion and $18.8 billion respectively in United States and International stock funds.

Clearly, investors have been nervous.  The economic growth that followed the 2017 cut in tax rates produced three straight quarters of 25% growth in earnings for the S&P 500 companies during 2018.  Yet earnings momentum has slowed, and concerns grew during the fourth quarter of 2018 when the S&P 500 Index sold off by nearly 14%.  Slowing economic trends, reduced earnings prospects and declining levels of international trade made many investors concerned that a recession might be looming.

These concerns were mitigated in 2019’s first quarter when the Federal Reserve indicated they were not likely to increase interest rates at any point in 2019.  And indeed, both the bond and stock markets began pricing-in some interest rate cuts this year by the Federal Reserve.  Yet economic growth trends also appeared to decline as corporate earnings trends fell during the first quarter, job growth slowed, while manufacturing and retail sales levels declined in the United States.

Markets then began to price-in the risk of a future recession.  The bond market inverted for a few days in March, and then recovered in April as corporate earnings proved to be better than expected for 2019’s first quarter.

Then in May, the United States and China ended trade negotiations and incremental tariff increases were threatened by both countries.  Stocks sold off in May, and the bond market rallied as investors concluded that international growth rates would decline further, which could force central banks across the world to lower interest rates.  As July began, investors were convinced that the Federal Reserve would lower its Fed Funds rate when its next meeting concludes on July 31st.

For much of June, investor expectations increased that the Fed Funds rate would be reduced by one-half of one percent, or 50 basis points, at the Fed’s July meeting since they had chosen not to make any changes at their June meeting.  And investors know that the Federal Reserve has a mandate to encourage growth while also working to increase employment levels in the United States.

Growth expectations for all of 2019 had fallen to 4% on July 1st from 8% last January as measured by analysts’ earnings estimates for companies in the S&P 500 Index.  Manufacturing activity in the United States, Japan and Europe also slowed noticeably in the second quarter.  A future recession is a risk.

Yet the job growth data for June was much better than expected, and to date, strong second quarter earnings have been announced by both PepsiCo and Delta Air Lines.  As July began, Bloomberg Analytics estimated that the companies in the S&P 500 Index will report an overall decline of 2.5% in earnings on an overall basis when compared to the second quarter of 2018 levels.  By comparison, a 4% decline had been expected for 2019’s first quarter, while reported earnings actually increased by about 1%.  Many analysts similarly expect second quarter results to also be better than this initially projected 2.5% decline.  We’ll have these answers in a few weeks.

So what should investors expect in the third quarter?  More market ups and downs, greater levels of market volatility, and lower rates of return.  Historically since 1980, Argus Research Company reports that the third quarter has produced the weakest rate of return of any quarter as measured by the S&P 500 Index.  In contrast, the fourth quarter has produced the highest average percentage gains with a 4.1% historic rate of return since 1980.  The first and second quarters on average have produced gains of 2.6% and 2.7% respectively versus the 0.3% historic average for the third quarter.  Needless to say for 2019, the markets have beaten the average 1st half rates of return by a lot, and one should not expect third quarter returns to be as strong.  Again, time will tell.

Importantly, world economies must grow for people to find work, to generate income and to improve their lives.  Most countries have also become more dependent on international trade to bolster their own economies.  Hence, in a world with increasing tariffs, economies will slow, and jobs will be lost.  Companies are also investing in faster forging presses, robots, and automated delivery systems to reduce operating costs.  Such advancements also make companies less dependent on China or other low wage countries as sites for production.  Products are also being produced closer to end users’ markets to reduce transportation costs and exposure to international vagaries.  So, future trading volumes across the world may not equal historic levels.

Accordingly, Europe and Asia in the future may need to become less dependent on trade and more dependent on their own regions for growth.  Such a transformation could make these countries even more dependent on the United States for services and future support.  Hence, the entire world will benefit from the Federal Reserve lowering interest rates.  Such steps may also ensure that the U.S. economy grows and continues to remain strong.  We do, after all, serve as the central bank for much of the world.

Clearly, the markets have provided mixed views and investors should expect both positives and negatives in the months ahead.  Economic growth trends remain favorable, albeit with slowing trends.  Fortunately, household savings levels have been strong, and most balance sheets are not particularly stretched.  Lower interest rates will likely help most parties and could even increase spending and investment activity.

With such uncertainties, SKY will continue to invest in quality companies and try to minimize risk.  Clients may want to increase their cash holdings to provide both comfort and liquidity for future buying opportunities should markets pull back.

If any of you have questions or would like to visit directly, please just let us know.  Happy summer everyone!

Securities noted above valued as of the market close on July 11, 2019:   Delta Air Lines, Inc. (DAL $60.16)  PepsiCo (PEP $134.65).  These summary/prices/quotes/statistics contained herein have been obtained from sources believed to be reliable but are not necessarily complete and cannot be guaranteed.  Errors and omissions excepted.