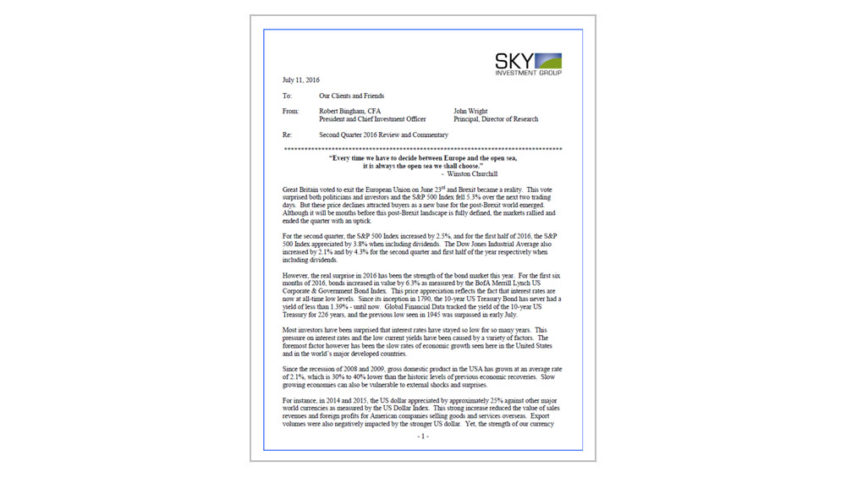 “Every time we have to decide between Europe and the open sea,
it is always the open sea we shall choose.”
– Winston Churchill

Great Britain voted to exit the European Union on June 23rd and Brexit became a reality.  This vote surprised both politicians and investors and the S&P 500 Index fell 5.3% over the next two trading days.  But these price declines attracted buyers as a new base for the post-Brexit world emerged.  Although it will be months before this post-Brexit landscape is fully defined, the markets rallied and ended the quarter with an uptick.

For the second quarter, the S&P 500 Index increased by 2.5%, and for the first half of 2016, the S&P 500 Index appreciated by 3.8% when including dividends.  The Dow Jones Industrial Average also increased by 2.1% and by 4.3% for the second quarter and first half of the year respectively when including dividends.

However, the real surprise in 2016 has been the strength of the bond market this year.  For the first six months of 2016, bonds increased in value by 6.3% as measured by the BofA Merrill Lynch US Corporate & Government Bond Index.  This price appreciation reflects the fact that interest rates are now at all-time low levels.  Since its inception in 1790, the 10-year US Treasury Bond has never had a yield of less than 1.39% – until now.  Global Financial Data tracked the yield of the 10-year US Treasury for 226 years, and the previous low seen in 1945 was surpassed in early July.

Most investors have been surprised that interest rates have stayed so low for so many years.  This pressure on interest rates and the low current yields have been caused by a variety of factors.  The foremost factor however has been the slow rates of economic growth seen here in the United States and in the world’s major developed countries.

Since the recession of 2008 and 2009, gross domestic product in the USA has grown at an average rate of 2.1%, which is 30% to 40% lower than the historic levels of previous economic recoveries.  Slow growing economies can also be vulnerable to external shocks and surprises.

For instance, in 2014 and 2015, the US dollar appreciated by approximately 25% against other major world currencies as measured by the US Dollar Index.  This strong increase reduced the value of sales revenues and foreign profits for American companies selling goods and services overseas.  Export volumes were also negatively impacted by the stronger US dollar.  Yet, the strength of our currency also made imports less expensive for Americans while reducing costs for Americans traveling and doing business abroad.

This decline in the British pound reduced the wealth and purchasing power of British citizens.  Such a sharp decline also reflects the political and economic uncertainty the British voters created.  While this uncertainty may reduce investors’ interest in investing in Great Britain, the cheaper currency also creates buying opportunities – bargains may now be available in the U.K.  The cheaper pound though will increase the cost of British imports while reducing the volume of goods and services sold to Great Britain.  Brexit has upset Great Britain’s trading relationships with its trading partners – approximately 50% of which is with the European Union.  The U.K.’s single largest trading partner is Germany.

So Germany, the Netherlands, France and others have a vested interest in resolving the Brexit issues.  But the differences will take months, if not years, to be completely resolved.  However, as the adjoining graph shows, the currency markets acted quickly to approximate Brexit’s financial ramifications. 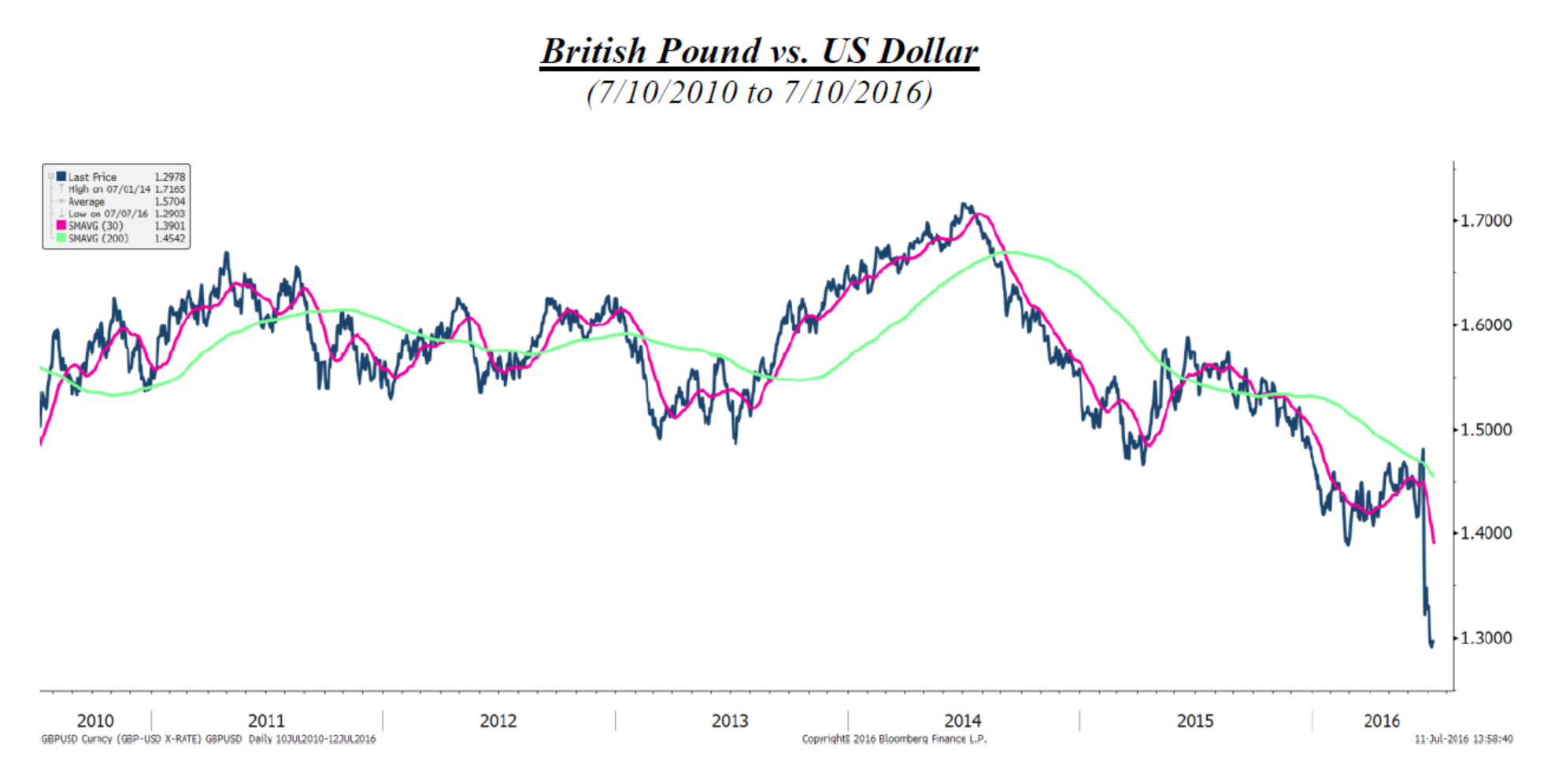 Fortunately for investors focused on the United States, the Brexit ramifications are minimal as roughly 3% of annual U.S. exports go to the United Kingdom.  And while the U.S. trades more extensively with Europe, Europe’s anemic growth rate has reduced the proportionate amount of European trade with the United States.  So even if Brexit does impair growth and does cause a recession in Europe, the impact on the United States will be manageable.

Fundamentally, Europe needs to take steps to encourage growth and new business formation in its countries.  Yet after five years of anemic growth in Europe, few policies have changed in Europe.  In fact, many decisions have simply been forestalled.

A good example of such inaction can be found in Italy.  The country has continued to use borrowed funds to subsist.  Currently, the country owes creditors 2.2 trillion euros, or approximately $1.8 trillion, which is about 135% of its gross domestic product.  Only Greece and Japan have higher levels of outstanding debt relative to their GDP.  Italy’s major banks have also kept problem loans on their balance sheets rather than charge them off.  The major banks in the United States recapitalized their balance sheets in 2009 after charging off their problem loans from that era’s recession.  Some 66 years after Rome hosted the Olympics in 1960, the city still has not paid off all its debts from that event.

In short, Italy’s capacity to grow is constrained by multiple factors.  And as a major part of the European Union, Italy’s burdens increasingly will be carried by Germany and France in Great Britain’s absence.  In time, many other countries’ citizens in the European Union may also ask themselves, “Just what does the EU do for us?”

So, Brexit has created some difficulties and may impair Europe’s future growth rate.  But Great Britain’s vote could also lead Europe to move forward more aggressively and take steps to improve economic opportunities for its citizens.  Brexit will certainly be watched closely with all the positive and negative ramifications studied thoroughly.  One immediate ramification that investors should recognize is that falling markets and market turbulence can quickly expose weaker market participants.

For example, banks and financial stocks were some of the hardest hit stocks following the Brexit vote.  The Stoxx 600 Banks Index for European bank and financial companies fell 21% in the two trading days following the vote in Great Britain.  U.K. banks, Barclays and the Royal Bank of Scotland declined by 32% and 30% respectively on those same two trading days.  And the three largest Italian banks fell on average by 26%.  Yet, these Italian banks are technically insolvent since their problem loans greatly exceed their levels of operating capital.  The British banks, like the American banks, already charged off the bulk of their problem loans so they will be strong enough to stand on their own following Brexit.  The Italians are still trying to obtain waivers from EU imposed rules as a first step before they re-capitalize their banks.

Investors worried about an economic slowdown, or pending recession in Great Britain, also aggressively sold positions in U.K. mutual funds that were invested in U.K. real estate.  In turn, 6 of the 10 largest U.K. property funds halted redemptions in their mutual funds.  Suddenly, investors gave up any direct access to their money – not helpful to those needing cash.

Italian regulators on July 6th also disallowed the short-selling of stock in one of their largest banks.  Perhaps additional announcements will follow.  Either way, imposed trading restrictions and reduced access to markets typically only provides temporary relief.

While Brexit already has had some impact, Great Britain’s central bank, the Bank of England, has also already taken some mitigating steps.  First, the BOE announced they will likely lower interest rates in the U.K. during the third quarter.  Second, they announced they would forestall more stringent capital requirements for the U.K. banks as had been anticipated in 2017.  While investors can interpret these announcements in varying ways, the announcements do provide some clarity for the months ahead.

Obviously, with over 2 million EU nationals currently working in Great Britain, the U.K. wants to minimize any exodus of firms and workers from its shores.  Steps taken to make it cheaper for foreign investors and businesses to operate in the U.K. will help.  Companies such as Diageo stand to benefit since approximately 90% of its revenues come from product sales outside of Britain.  Thus, 90% of its revenues will be valued in foreign currencies with greater values.

In the United States, fundamental trends still seem to be improving.  Job growth numbers as announced on July 8th were strong and well-received.  PepsiCo released better than expected second quarter results on July 7th.  Many companies in the weeks ahead will follow with their own quarterly earnings releases.  More political and governmental announcements will also be heard.

By investing in top quality companies, our clients have benefited as the market has chased yield and quality stocks.  No doubt, some investors will pursue additional risk at some point, and in turn, valuations will change and market volatility will again be upon us.  That’s what markets do: they bounce up and down.  At SKY Investment Group, we’ll strive to maintain a steady hand and stick to our knitting.

Do let us know if you have any questions.

“The verdict so far is that Brexit will not have a big impact on the U.S., possibly zero.”
– James Bullard, President of the St. Louis Federal Reserve Bank on July 1, 2016

Securities noted above valued as of the market close on July 8, 2016: