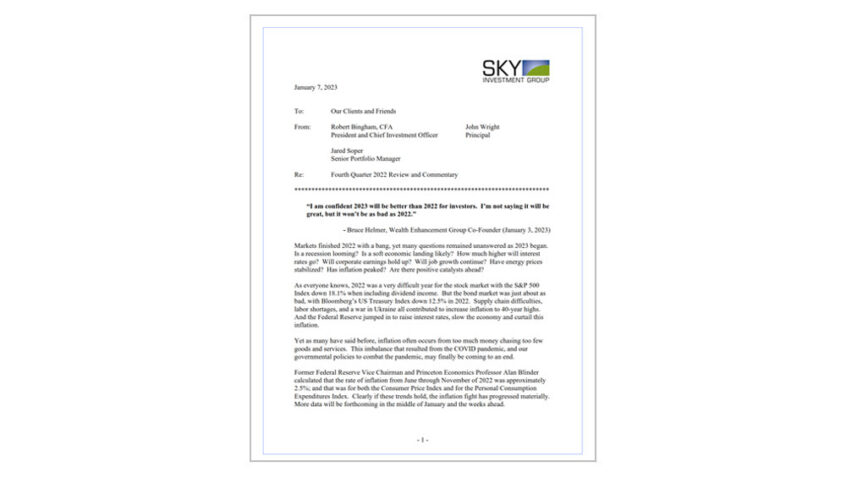 Markets finished 2022 with a bang, yet many questions remained unanswered as 2023 began. Is a recession looming? Is a soft economic landing likely? How much higher will interest rates go? Will corporate earnings hold up? Will job growth continue? Have energy prices stabilized? Has inflation peaked? Are there positive catalysts ahead?

As everyone knows, 2022 was a very difficult year for the stock market with the S&P 500 Index down 18.1% when including dividend income. But the bond market was just about as bad, with Bloomberg’s US Treasury Index down 12.5% in 2022. Supply chain difficulties, labor shortages, and a war in Ukraine all contributed to increase inflation to 40-year highs. And the Federal Reserve jumped in to raise interest rates, slow the economy and curtail this inflation.

Yet as many have said before, inflation often occurs from too much money chasing too few goods and services. This imbalance that resulted from the COVID pandemic, and our governmental policies to combat the pandemic, may finally be coming to an end.

Former Federal Reserve Vice Chairman and Princeton Economics Professor Alan Blinder calculated that the rate of inflation from June through November of 2022 was approximately 2.5%; and that was for both the Consumer Price Index and for the Personal Consumption Expenditures Index. Clearly if these trends hold, the inflation fight has progressed materially. More data will be forthcoming in the middle of January and the weeks ahead.
Such improvement reflects the renewed balance in our supply chain more than the impact from higher interest rates. And that juxtaposition was embraced by the stock market on January 6th after December job growth and wage data was released by the US Department of Labor.

The data supported the premise that the economy was still growing as 2022 ended, and that inflation also continued to abate. However, the January 6th data from the non-manufacturing ISM Purchasing Manager’s Index showed that the services industry contracted in December for the first time in 30 months. And new orders for manufactured goods also declined for the second month in a row. Economic growth appears to have slowed as 2023 began.

The Federal Reserve will assess this data along with reams of other data when they next meet on January 31st and February 1st. In the meantime, traders calculated that the Fed’s next rate increase will only be 25 basis points, or a drop from the 50 basis point increase implemented on December 14th.

This debate over expectations of Federal Reserve rate increases is the primary factor behind the market’s sharp level of volatility. Higher interest rates reduce the value of future earnings streams. Consequentially, growth companies in the high tech sector suffered bigger stock market losses than many other companies over the last twelve months. Yet as RSM’s Chief Economist Joe Brusuelas pointed out on January 6th, ” We’re closer to the peak in Fed policy rates than we were prior to the report, and the Fed can now strongly consider a further slowing in the pace of its hikes.”

In fact according to the CME Group, on January 6th fed fund interest rate futures had priced in a 75% probability of a 25 basis point increase by the Federal Reserve on February 1st. But supplemental data, entrenched objectives, and a plan to whip inflation now, may lead the Fed to increase rates again by 50 basis points when they next meet.

This back-and-forth on rate expectations, and consequential market volatility, will likely persist for much of 2023’s first half. Along the way, companies will release earnings reports, consumers will reduce consumption levels, and wage growth will likely decline. That is, the economy will slow. But we believe no severe recession should be expected.

Analysts at both Goldman Sachs and JPMorgan expect the stock market to retest its 2022 lows in the first half of 2023 before rebounding in the second half of 2023. These analysts expect the S&P 500 Index to gain between 5% and 10% over all in 2023. But there will be volatility along the way.

In this climate, corporate earnings matter greatly. Large banks will be some of the earliest companies to report earnings, and given the slowing economy, they will take larger than normal provisions against bad debts. The banks will over-reserve against their prospective charge-offs because that’s what banking regulators expect. The banks will then have excess reserves to supplement earnings in 2023. We expect that there will be no banking crisis in 2023.

Overall, analysts expect fourth quarter 2022 earnings to fall 4.1% versus the record gains seen in 2021 according to FactSet. The energy sector will again have the strongest earnings while the consumer discretionary and materials sectors are expected to have the sharpest declines. And for all of 2023, FactSet expects corporate earnings to increase by 4.7% which is comparable to the expected growth for all of 2022. The US dollar is expected to weaken in 2023 which will also supplement the large pool of international revenue earned by many of the S&P 500 companies. However, corporate margins are expected to decline in 2023. Yet margins are still projected to approximate 10% versus the 11.3% level seen in 2022’s 3rd quarter.

So, time will tell. And while we think the economy will slow, we also believe that seasoned management teams have successfully worked through such cycles before. The market downdraft in 2022 repriced many investment assets, which created opportunities. And while market volatility persists, we encourage clients to focus on their financial goals rather than the day-to-day market swings.

With luck, Bank of America’s Head of U.S. Economics Michael Gapen properly summed up 2023 expectations when on January 6th he said, ”Inflation is trending lower, and the markets will turn.”

Do please let us know if you would like to meet with us or speak with us directly.

Securities noted above valued as of the market close on January 6, 2023: