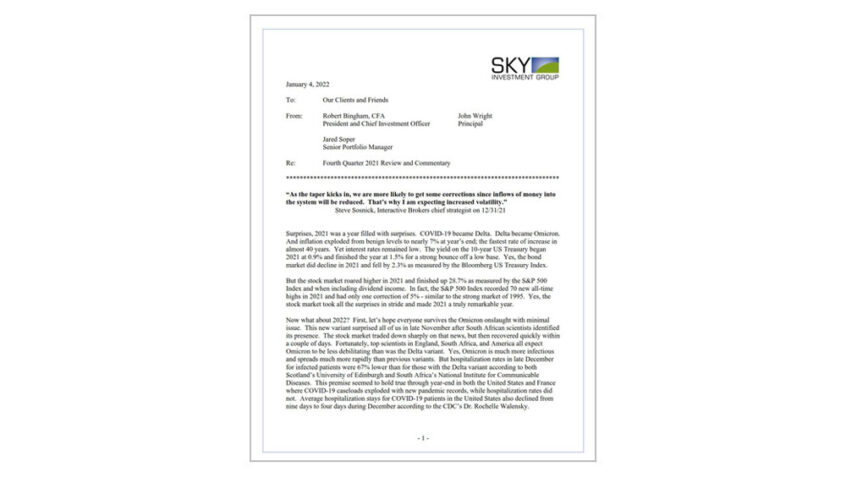 “As the taper kicks in, we are more likely to get some corrections since inflows of money into the system will be reduced.  That’s why I am expecting increased volatility.”
– Steve Sosnick, Interactive Brokers chief strategist on 12/31/21

Surprises, 2021 was a year filled with surprises.  COVID-19 became Delta.  Delta became Omicron.  And inflation exploded from benign levels to nearly 7% at year’s end; the fastest rate of increase in almost 40 years.  Yet interest rates remained low.  The yield on the 10-year US Treasury began 2021 at 0.9% and finished the year at 1.5% for a strong bounce off a low base.  Yes, the bond market did decline in 2021 and fell by 2.3% as measured by the Bloomberg US Treasury Index.

But the stock market roared higher in 2021 and finished up 28.7% as measured by the S&P 500 Index and when including dividend income.  In fact, the S&P 500 Index recorded 70 new all-time highs in 2021 and had only one correction of 5% – similar to the strong market of 1995.  Yes, the stock market took all the surprises in stride and made 2021 a truly remarkable year.

Now what about 2022?  First, let’s hope everyone survives the Omicron onslaught with minimal issue.  This new variant surprised all of us in late November after South African scientists identified its presence.  The stock market traded down sharply on that news, but then recovered quickly within a couple of days.  Fortunately, top scientists in England, South Africa, and America all expect Omicron to be less debilitating than was the Delta variant.  Yes, Omicron is much more infectious and spreads much more rapidly than previous variants.  But hospitalization rates in late December for infected patients were 67% lower than for those with the Delta variant according to both Scotland’s University of Edinburgh and South Africa’s National Institute for Communicable Diseases.  This premise seemed to hold true through year-end in both the United States and France where COVID-19 caseloads exploded with new pandemic records, while hospitalization rates did not.  Average hospitalization stays for COVID-19 patients in the United States also declined from nine days to four days during December according to the CDC’s Dr. Rochelle Walensky.

COVID-19 vaccinations have supported these trends by reducing the severity of the disease for those infected, and by accelerating one’s recovery.  Unfortunately, the majority of new patients at hospitals have not been vaccinated, and their carried risk remains very high.  Vaccines work, and we should all be grateful for the efforts from Pfizer, Moderna, Johnson & Johnson, Merck, Eli Lilly, and others to better control this disease.  Hopefully, Oxford University’s immunologist and Professor of Medicine John Bell’s comments on 12/28/21 become prophetic:

“The Omicron variant is not the same disease we were seeing a year ago.  The horrific scenes that we saw a year ago – intensive care units being full, lots of people dying prematurely – that is now history in my view, and I think we should be reassured that that’s likely to continue.”

The stock market’s December rebound from the Omicron announcement reflected this hope.  It also reflected the exceptionally strong corporate earnings reports that were released in the third quarter.  Oxford Economics’ Gregory Daco reported that profits for all U.S. Corporations in 2021 as a share of gross domestic product have matched the record highs of 1960.  The adjoining graph shows how operating margins for the S& P 500 companies have rebounded strongly from the 2020 recession.  This improvement reflects better operating practices companies had to adopt after furloughing many workers in 2020.  In many cases, companies reduced the breadth of their product offerings while centralizing production and utilizing new technologies.

But robust consumer demand for goods and services also played a big role in expanding corporate profits.  If nothing else, increased sales can reduce a company’s fixed costs over its increased volumes and improve its profits.  On December 26, 2021, Mastercard’s SpendingPulse reported that holiday sales grew by 8.5% in the United States from 2020 levels.  Clothing sales increased by 47% over 2020 levels while 32% more was spent on jewelry and 16% more on electronics.  And the 2021 spending levels in each of these three categories grew by more than 20% from the pre-pandemic levels of 2019.  Department store sales were also 11% greater in 2021 than in 2019.  People shopped actively in 2021’s fourth quarter raising economic demand.

That being said, growth rates are expected to slow in 2022.  Atlanta’s Federal Reserve forecasted a 4% growth rate for the United States in 2022 after an expected 6% growth rate for all of 2021.  That 4% projection compares favorably to projected growth rates for Europe, China, and other economies in 2022.  Indeed, the European Central Bank estimated that the United States increased its consumption of durable goods by 45% over 2018 levels.  And the Bank of England estimated that United States’ consumers accounted for 90% of the 22% increase in durable goods orders seen in advanced economies since 2019.  This helps explain why shipping ports in the United States have been so backed up, and why companies like Meyer Burger Technology of Switzerland and Siemens Gamesa Renewable Energy of Spain have committed approximately half a billion dollars to expand operations in the United States.  In fact, Oxford Economics reported that the United States has been the world’s largest recipient of foreign direct investment since 2019.

So although our growth rate is slowing, corporate earnings are still expected to expand in 2022; but at a 9% rate versus the 40% rate of 2021 as projected by Blomberg Finance.  The economic base is also larger now, and as 2022 began, corporate earnings for 2023 were expected to grow by 10% over 2022 levels.  If those projections bear out, the moderating growth may mitigate the increase in inflation particularly as shoppers become more price sensitive, travel more, and focus more on services than hard goods.

Consumer finances are also in better shape now than they have been in years.  Consumer savings are at record levels, and jobs are readily available.  In fact, wage growth has increased materially for the first time in ten years, as shown in the adjoining graph.  This growth has given workers renewed confidence to ask for a raise or look for new jobs.   Households are now much better positioned financially to absorb higher prices than they were during the inflationary 1970’s.

Workers are Getting Expensive
Employment Cost Index (2008 to 2021)

While inflation rates have soared, commodity prices seemed to abate as 2021 ended.  West Texas Intermediate Crude prices increased by 55% in 2021, and the price for the global benchmark, Brent Crude, increased by 50% in 2021.  This increase was driven in part by natural gas and coal shortages last fall and incremental calls for supply.  President Biden’s decision to release oil from our country’s strategic reserves combined with OPEC’s decision to increase their production levels helped temper these price increases.  Warmer than normal weather in November and December also sharply reduced demand and allowed inventory levels to rebuild.  In fact, “hedge funds have slashed their bullish wagers on commodities by 35% since a February peak,” according to data from the U.S. Commodity Futures Trading Commission and reported by Bloomberg’s Gerson Freitas, Jr. on December 31, 2021.

Stable energy prices will help moderate future inflation levels.  And labor costs may also grow more slowly in 2022 as economic growth slows down.   Further improvements in supply chain bottlenecks will also help.  Together, these factors suggest that inflation rates should moderate as we transition through 2022.

Such prospects provide confidence that stock market returns in 2022 will be okay; not necessarily up by double digits, but not likely to be down materially either.  Yes, volatility should be greater this year as the Federal Reserve ends its quantitative easing and raises interest rates.  But economic growth should also continue, which will increase corporate profits and keep investors interested in buying stocks.  After the very strong returns in 2021, more moderate returns would be just fine.

Hence, we continue to invest in strong companies with attractive margins and managements that have shown an ability to adapt to change.  Our client portfolios look healthy, but we do encourage you to reach out to us with your questions.  And as 2022 begins, we wish you all good health, and a Very Happy New Year!

Securities noted above valued as of the market close on January 4, 2022: