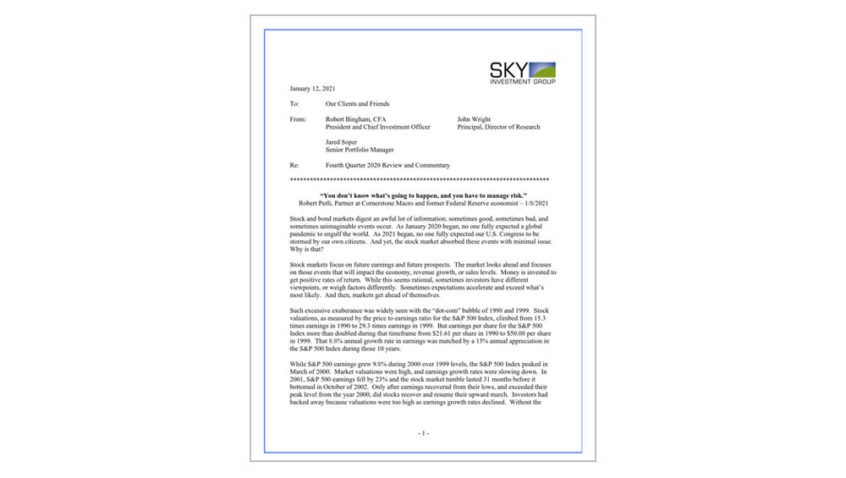 “You don’t know what’s going to happen, and you have to manage risk.”
– Robert Perli, Partner at Cornerstone Macro and former Federal Reserve economist on January 8, 2021

Stock markets focus on future earnings and future prospects. The market looks ahead and focuses on those events that will impact the economy, revenue growth, or sales levels. Money is invested to get positive rates of return. While this seems rational, sometimes investors have different viewpoints, or weigh factors differently. Sometimes expectations accelerate and exceed what’s most likely. And then, markets get ahead of themselves.

While S&P 500 earnings grew 9.8% during 2000 over 1999 levels, the S&P 500 Index peaked in March of 2000. Market valuations were high, and earnings growth rates were slowing down. In 2001, S&P 500 earnings fell by 23% and the stock market tumble lasted 31 months before it bottomed in October of 2002. Only after earnings recovered from their lows, and exceeded their peak level from the year 2000, did stocks recover and resume their upward march. Investors had backed away because valuations were too high as earnings growth rates declined. Without the supporting growth rates, the dot-com bubble burst in March of 2000. The table below presents some of this data from Bloomberg Finance L.P.

But the strong growth in the 1990’s was partly due to the rebound off the sharp recession of 1990 and 1991. That recession badly hurt most sectors of the economy, and it took five years for the S&P 500 companies to exceed their previous peak earnings level seen in 1989. However, the S&P 500 Index anticipated the end of the recession and market valuations increased from 14.7 times earnings in 1989 to nearly 27 times the depressed earnings of 1991. Earnings growth rates for the S&P 500 companies then exploded with a compound growth rate of 21.6% from 1992 through 1996. Over the next four years, the S&P 500 companies grew earnings at a 9% rate. That 26.7 price/earnings ratio of 1991 fell to 15.4 times in 1994 as corporate earnings grew to once again support the upward march of S&P 500 stock prices during the 1990’s. The table below presents some of the data from that time period. 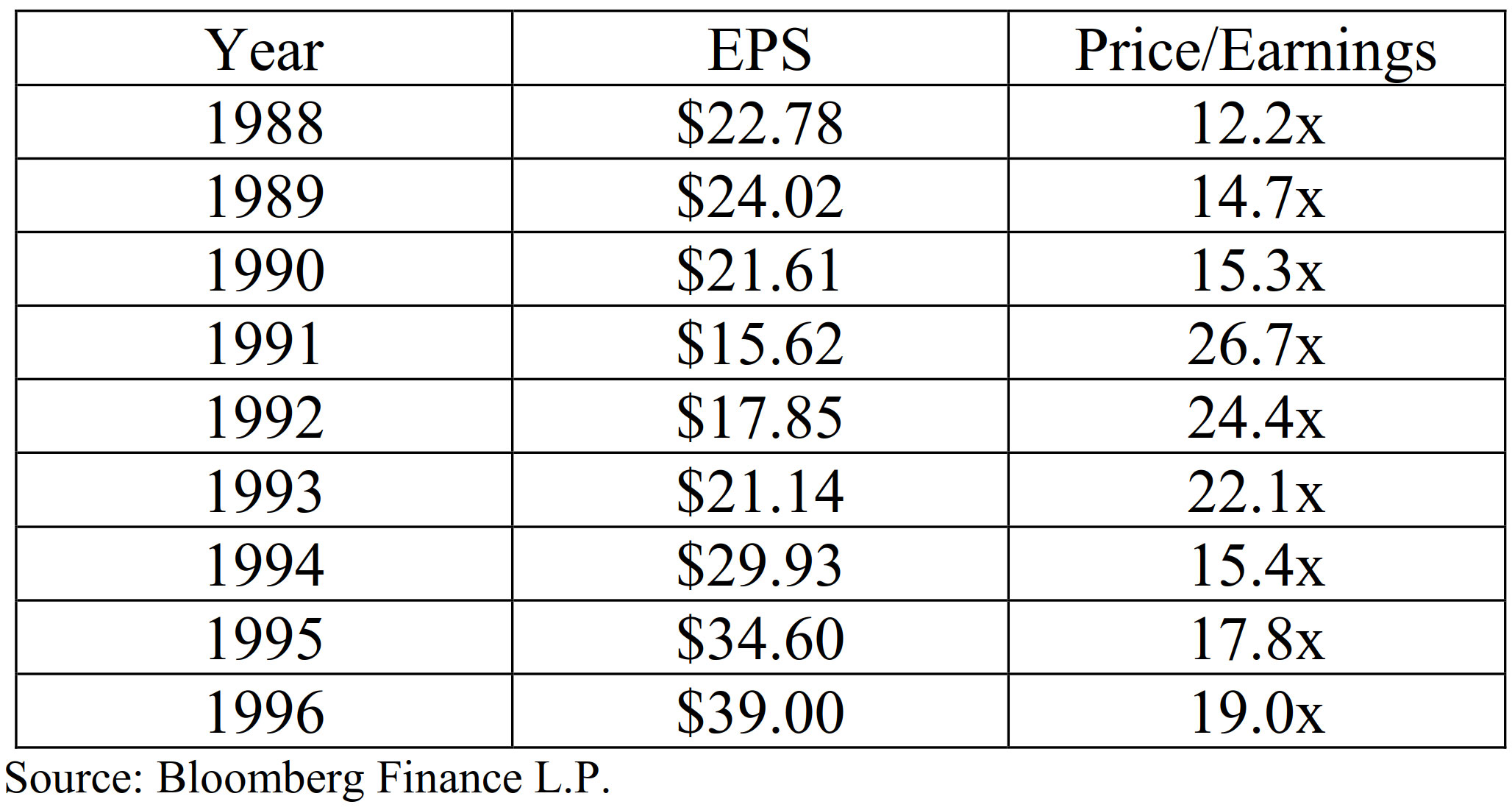 More importantly, expected earnings for the S&P 500 companies in 2021 are expected to surpass their 2019 levels. Or said another way, these companies will have returned and/or exceeded their peak level of earnings within a 2-year timeframe. That’s one of the quickest bounce-backs from depressed earnings in history, and compares to the 5-year span seen after the 2008 recession.

Now obviously, the 2020 pandemic and attendant recession have not been like any other recession as America’s GDP fell by 31% and then increased by 33% on an annualized basis in 2020’s second quarter and third quarter respectively. But this recession was instituted by government lock downs and restricted travel. This event-driven recession was superimposed on a healthy economy and has impacted the various economic sectors very much differently. Yet, the negative impact was extreme with over 20 million people losing their jobs. Fortunately, more than half of those laid off have now returned to work, but full employment in the United States with a 3.5% unemployment rate won’t be seen again for another year or two.

For those who expected 2020’s recession to compare with the last three recessions, they missed out on the strong market gains of 2020 and the S&P 500’s 18.4% returns. Clients may remember our quarterly report from April 5th last year when we wrote about the investment opportunity created by the massive sell-off last March. We wrote about a recovery for the S&P 500 Index and the rates of return investors might expect from four different recovery scenarios. That table is reprinted below.

As noted, the S&P 500 Index’s recovery from its 2585 close on 3/31/20 to its previous peak of 3386 on 2/19/20 would deliver investors anywhere from a 7% to a 31% annual rate of return. Turns out that recovery occurred in only 5 months. That rapidity was a function of corporate earnings not being hit as badly from the recession as initially expected. Corporate earnings declined from their 2019 peak, but that decline initially was expected to approximate 35% and now is only anticipated to be 17%. Earnings results appear to be half as bad as expected, while regaining their momentum and surpassing the previous peak levels within two years; despite Covid-19, despite the turmoil in Washington D.C., and despite the extreme political polarization in the United States. Earnings matter, fundamentals matter, and the stock market goes higher when corporations earn more money. Investors will exit if they don’t expect positive rates of return.

The price/earnings ratio for the S&P 500 Index was 30.5 on 1/8/21. But Bloomberg Finance’s consensus forecasts for 2021 and 2022 S&P 500 company earnings are $166.98 and $192.38 respectively. Such numbers would deliver a 23.8% compound growth rate from 2020’s expected $125.56 level. That strong a recovery has not been seen for 25 years. Those numbers also suggest the S&P 500 Index on 1/8/21 was trading around 19 or 20 times future earnings. So, yes, on January 8th, the stock market looked expensive, but maybe not quite as expensive as some believed. Much of the market’s upside may also already have been priced into these valuations. But maybe not. A lot depends on the strength of the economic recovery, the breadth of the recovery, changes in interest rates, changes in tax rates, the amount of additional stimulus, and the level of increased regulation.

So as usual, there’s a lot of change in the wind. Corporate earnings for 2020’s 4th quarter will be released in January and February, Joe Biden will be inaugurated on January 20th, COVID-19 vaccinations will increasingly be rolled out, and hopefully any incremental lockdowns won’t be too lengthy, nor too costly. Together, these issues will give the markets both positive and negative information to digest. Slowing economic trends in this year’s first quarter should be expected. Markets could well get spooked by slower inoculations, disappointing events in Washington D. C., or rising interest rates. So, investors should anticipate the market giving back some of its gains along the way. But if the economy’s growth picks up this spring and summer as is expected, rates of return for investors in 2021 should be nicely positive.

We wish you all the Very Best for 2021, and we hope to see you all out and about with one another before too long. Do call us if you’d like to visit.