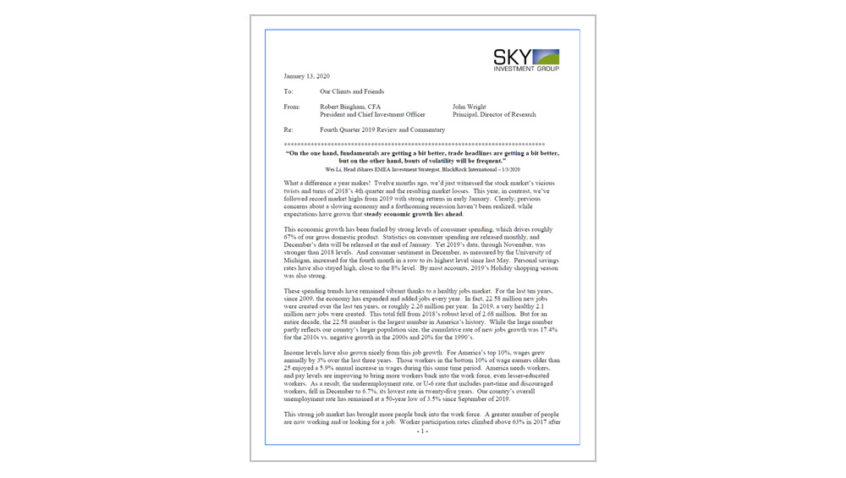 What a difference a year makes!  Twelve months ago, we’d just witnessed the stock market’s vicious twists and turns of 2018’s 4th quarter and the resulting market losses.  This year, in contrast, we’ve followed record market highs from 2019 with strong returns in early January.  Clearly, previous concerns about a slowing economy and a forthcoming recession haven’t been realized, while expectations have grown that steady economic growth lies ahead.

This economic growth has been fueled by strong levels of consumer spending, which drives roughly 67% of our gross domestic product.  Statistics on consumer spending are released monthly, and December’s data will be released at the end of January.  Yet 2019’s data, through November, was stronger than 2018 levels.  And consumer sentiment in December, as measured by the University of Michigan, increased for the fourth month in a row to its highest level since last May.  Personal savings rates have also stayed high, close to the 8% level.  By most accounts, 2019’s Holiday shopping season was also strong.

These spending trends have remained vibrant thanks to a healthy jobs market.  For the last ten years, since 2009, the economy has expanded and added jobs every year.  In fact, 22.58 million new jobs were created over the last ten years, or roughly 2.26 million per year.  In 2019, a very healthy 2.1 million new jobs were created.  This total fell from 2018’s robust level of 2.68 million.  But for an entire decade, the 22.58 number is the largest number in America’s history.  While the large number partly reflects our country’s larger population size, the cumulative rate of new jobs growth was 17.4% for the 2010s vs. negative growth in the 2000s and 20% for the 1990’s.

Income levels have also grown nicely from this job growth.  For America’s top 10%, wages grew annually by 3% over the last three years.  Those workers in the bottom 10% of wage earners older than 25 enjoyed a 5.9% annual increase in wages during this same time period.  America needs workers, and pay levels are improving to bring more workers back into the work force, even lesser-educated workers.  As a result, the underemployment rate, or U-6 rate that includes part-time and discouraged workers, fell in December to 6.7%, its lowest rate in twenty-five years.  Our country’s overall unemployment rate has remained at a 50-year low of 3.5% since September of 2019.

This strong job market has brought more people back into the work force.  A greater number of people are now working and/or looking for a job.  Worker participation rates climbed above 63% in 2017 after reaching a low of 62.4% in September of 2015.  But we’ll need additional growth to reach the 67% levels of 2000 and 2001.  This expansion of the work force has also contributed to keeping inflation in check as our economy has grown.

This growth has also been felt across many sectors of the economy.  The health care industry, leisure and hospitality, construction, transportation, government, manufacturing, financial and retail sectors have all seen employment growth, both recently and over the last ten years.  Yet, increasingly, the retail sector is transitioning away from on-site to on-line shopping.  And the manufacturing sector weakened in 2019’s second half as energy producers reduced exploration & production activity as energy prices stagnated.  Boeing’s setbacks also reduced manufacturing activity in the United States last year.  Weakness in these two sectors also helped keep inflation in check in 2019.

Jim Bianco, the President of Bianco Research, lists inflation as one factor that can break an economy.  Excessive competition, debt loads, margin erosion, wars, and governmental policies are other factors that can reduce economic growth.  However, new technology can help repair or expand an economy, by making companies more productive, more economical, or more capable of adapting to change.  As he wrote on January 3rd, 2020, “The natural trend for an economy is to grow.  A recession only occurs when something breaks.  So, this record expansion is happening because nothing has broken.”  Previous recessions were often caused by accelerating energy costs.  In 2019, recession fears may have been incited by overly restrictive Federal Reserve policy and its steps to increase interest rates during 2018.  Concerns about a tariff war certainly did not help, either.

Yet as these concerns abated, investors became increasingly confident that stronger earnings in 2020 would follow the weak corporate earnings of 2019.  As a result, the stock market embraced America’s broad growth as seen in all sectors of the economy.  This broad growth was reflected in all the sub-indices of the S&P 500 Index as listed below. 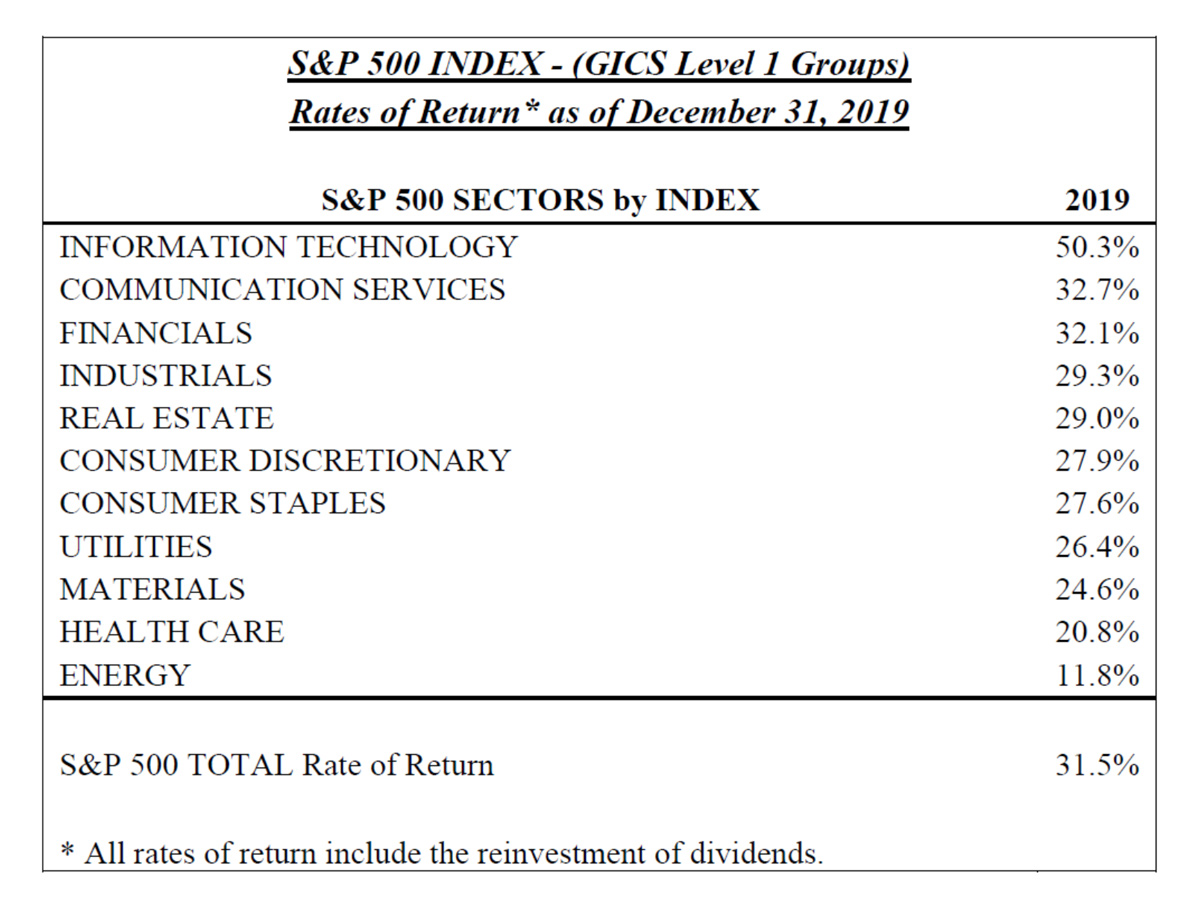 The table shows that seven of the eleven S&P 500 sectors were within 5% points of the S&P 500’s 31.5% return last year.  That’s a tight band, especially since the technology sector outperformed the overall market by nearly 20 percentage points.  These returns were the best in six years and fueled very nice returns for investors.  By comparison, the Bloomberg Barclays US Treasury Index increased by 6.9% in 2019.

Some analysts argue that such strength, and such breadth across every sector of the market, bodes well for further market appreciation.  Others argue that being defensive amongst all this market strength is only prudent.  Investors can best choose their own path by better defining one’s risk tolerance and understanding one’s cash flow needs.

But what should investors expect in 2020?  A lot of noise.  America’s Presidential election process is underway.  Tariff negotiations progress.  Impeachment proceedings have begun.  Mideast conflicts persist.  Brexit has started.  Economic growth remains weak in Europe and England.  Other imponderables exist as well.

She also reported that, “Bull markets have lasted an average of 18 years over the past century, suggesting that U.S. stocks may only be crossing the halfway point of this expansion phase.  The market’s course is similar to the one in the 1950-60’s, and hasn’t developed the melt-up characteristics of the 1980-90’s bull run.  If there’s a short-term risk to stocks, it’s likely earnings growth.” – 12/19/19.

As of January 13th, corporate earnings were expected to decline for the fourth quarter in a row on a year-over-year basis.  Yet these negative trends were expected to become positive in 2020, and the stock market has been pricing in these improving trends.

The Stock Trader’s Almanac also uses the full month of January’s results to forecast a given year’s returns.  Hence the phrase, “So goes January, so goes the year.”

Ms. Adams also reported that, “Uncertainty surrounding presidential re-elections doesn’t usually faze equities.  Quite the contrary; this has historically accompanied strong returns.  The S&P 500 in the fourth year of a presidential term, regardless of incumbent, rose an average of 5.7% and was positive 72.7% of the time since 1932… Average volatility, as measured by the standard deviation of daily price returns, is lower in presidential re-election years than a typical year for the S&P 500.” – 11/27/19.

But what about all the dissonance and America’s divided ways?  Going back to 1990, the Wall Street Journal and NBC News have conducted a joint poll every year that asks the question, “Is the country headed in the right direction or gone off the wrong track?”  Only twice in 30 years have more than 70% of people from both political parties answered that we’re headed in the right direction.  In both of those two years, 1991and 2002, America was at, or close to being at war with Iraq.

Otherwise, for 73% of the last 30 years, Americans have seen the country on different tracks.  We’ve been a divided nation for decades.  But over the last 30 years, perhaps the spate of technological and social change has accelerated and perpetuated our political divisions or made them more noticeable.

For an academic’s perspective on the New Year, we quote the University of Pennsylvania’s Wharton School of Business Professor Jeremy Siegel from January 6, 2020.  “I think this market is fully valued and not undervalued, but I don’t think it’s overvalued.”  He also doesn’t expect “the Iranian developments to derail the domestic market or economy.”  And while he’s expecting “a more modest gain for stocks compared against last year’s powerful annual rally,” he’s still looking for gains of between 0% and 10% for 2020.

Siegel also forecasts a Dow Jones Industrial Average of “40,000 in the next 4 or 5 years.”  Since he was the first to forecast the Dow Jones at 20,000 maybe he’s worth listening to now.  Just remember, stocks don’t always travel in one-way directions.

Do let us know if you have any questions or would like to visit.

Securities noted above valued as of the market close on January 10, 2020: