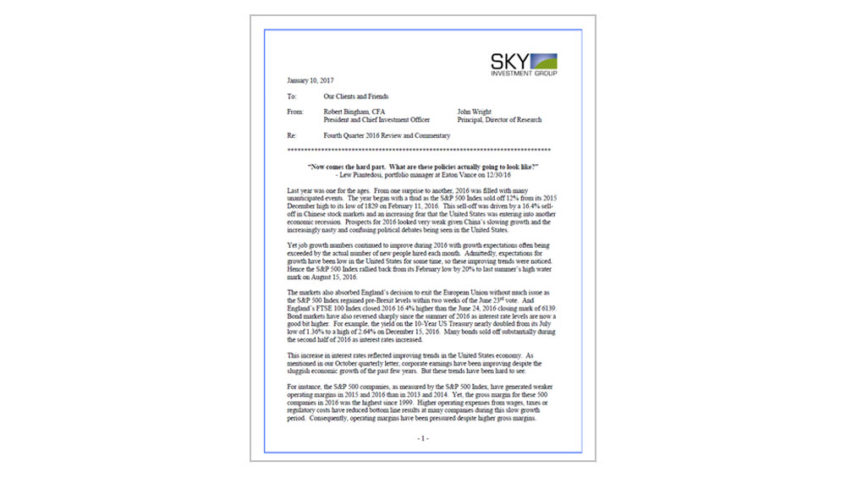 “Now comes the hard part.  What are these policies actually going to look like?”
– Lew Piantedosi, portfolio manager at Eaton Vance on 12/30/16

Last year was one for the ages.  From one surprise to another, 2016 was filled with many unanticipated events.  The year began with a thud as the S&P 500 Index sold off 12% from its 2015 December high to its low of 1829 on February 11, 2016.  This sell-off was driven by a 16.4% sell-off in Chinese stock markets and an increasing fear that the United States was entering into another economic recession.  Prospects for 2016 looked very weak given China’s slowing growth and the increasingly nasty and confusing political debates being seen in the United States.

Yet job growth numbers continued to improve during 2016 with growth expectations often being exceeded by the actual number of new people hired each month.  Admittedly, expectations for growth have been low in the United States for some time, so these improving trends were noticed.  Hence the S&P 500 Index rallied back from its February low by 20% to last summer’s high water mark on August 15, 2016.

The markets also absorbed England’s decision to exit the European Union without much issue as the S&P 500 Index regained pre-Brexit levels within two weeks of the June 23rd vote.  And England’s FTSE 100 Index closed 2016 16.4% higher than the June 24, 2016 closing mark of 6139.  Bond markets have also reversed sharply since the summer of 2016 as interest rate levels are now a good bit higher.  For example, the yield on the 10-Year US Treasury nearly doubled from its July low of 1.36% to a high of 2.64% on December 15, 2016.  Many bonds sold off substantially during the second half of 2016 as interest rates increased.

This increase in interest rates reflected improving trends in the United States economy.  As mentioned in our October quarterly letter, corporate earnings have been improving despite the sluggish economic growth of the past few years.  But these trends have been hard to see.

For instance, the S&P 500 companies, as measured by the S&P 500 Index, have generated weaker operating margins in 2015 and 2016 than in 2013 and 2014.  Yet, the gross margin for these 500 companies in 2016 was the highest since 1999.  Higher operating expenses from wages, taxes or regulatory costs have reduced bottom line results at many companies during this slow growth period.  Consequently, operating margins have been pressured despite higher gross margins.  Impressively, consensus expectations for 2017 and 2018 suggest that the gross margin for these 500 companies may be 15% higher than that seen in 2016.

Gross sales numbers for this group of 500 companies only increased by 1.4% in 2016 over 2015 levels.  Yet, analysts project gross sales to grow by 6% and 5% rates respectively in 2017 and 2018.  While forecasts are not always fully realized, we do like the trends that are being forecasted.  More tangibly, the monthly job growth numbers have remained solid over the last year.  So if corporate profits do continue to grow from more sales and from improving operating margins, then businesses will continue to hire more employees, which will support more economic growth.

Even the Federal Reserve has embraced this notion that economic growth will likely be stronger in 2017 than was the case in 2016.  On December 14, 2016, the Fed raised the interest rates for their benchmark federal funds rate by 25 basis points, or by one-quarter of 1%.  This was their first rate increase since December 15, 2015.  More importantly, the Fed has indicated that they expect to raise rates another three times during 2017.  Some investors actually expect the Fed to raise rates by as many as six times in 2017.

So, improving growth trends may in fact be upon us.  Clearly, the markets have embraced this notion since the presidential election on November 8th.  From that date, investor bullishness suggests that Congressional efforts in 2017 to lower corporate tax rates and reduce regulatory costs will improve bottom line results and economic growth in America.

Bloomberg Finance actually compared this market move for the five weeks following this election against all the other presidential elections since the Dow Jones Industrial Average was created in 1896.  As seen in the graph below, the market rally for Trump has been the biggest gain for any new president since 1900.  This market move has truly been unprecedented.

December 20, 2016.  The Nasdaq Composite Index grew by 6.7% from November 7th to its high mark on December 27, 2016.  We suspect that all investors have been surprised by how strongly the market has embraced this shift to a new administration.

Now what benefits did the markets see from a Trump Presidency that many of us did not?  Lower corporate tax rates, more public spending on infrastructure and fewer regulatory burdens may in fact help everybody.  Yet Congress still needs to legislate and write these changes into law to deliver those benefits.  One can certainly expect that on January 20th some executive decisions can be overturned and our government’s direction adjusted slightly, but the new administration has to be formed, vetted, and endorsed before our new government actually begins its work.  Hence, the market’s trajectory slowed in January as investors await the new administration’s efforts to implement new policies.

We could also see higher rates of inflation in the United States from increased levels of government spending.  Yet faster rates of economic growth may support higher wages and help absorb some higher inflation.  As of January 1st, Bloomberg Finance predicted a 2.0% growth rate in gross domestic product for all of 2016 followed by a 2.3% growth rate in 2017 and a 2.7% growth rate for 2018.  Clearly, we will only know with time.  However such trends suggest that job growth will continue, wage levels will move higher, and that consumer spending levels will continue to grow.

If tax rates do decline, companies may see more growth in their operating margins.  Consensus estimates at the beginning of 2017 for the S&P 500 companies projected double-digit earnings growth for both 2017 and 2018.  Such growth in corporate earnings has not been seen since 2010 and 2011.  Consequently, valuations for stocks that are tied to future expectations are much more attractive now than those valuations tied to historical earnings trends.

The next chart depicts the regulatory burden that the US economy has absorbed over the last nineteen years.  One can see that during the last seven years there have been on average 81 new rules each year that have burdened our economy with $100 million or more of costs on an annual basis.  These government rules were created by a combination of presidential orders and agency regulations under the Obama administration.  By comparison, the Bush administration enacted 63 such rules on average each year, while the Clinton administration created 66 such ordinances per annum.  Companies and consumers have had to pay more for purchased goods and services over the last few years because of these new regulations. 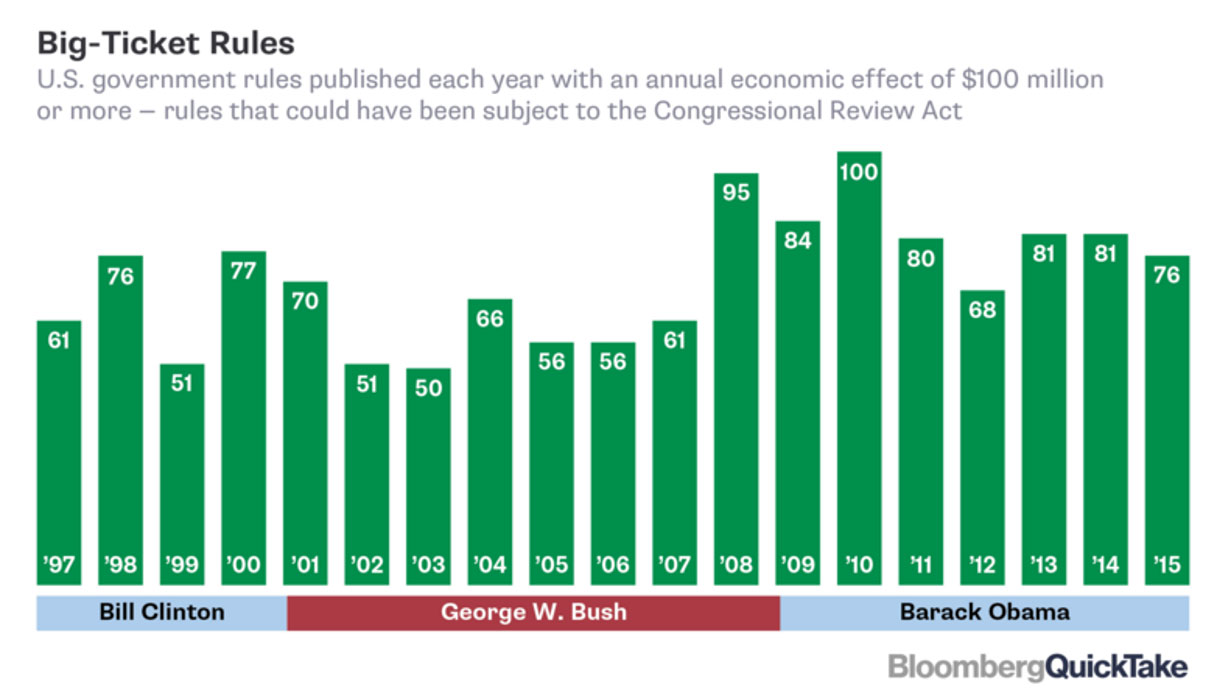 While all of us may have benefited from these regulations given improvements to our health or our environment, all of us should also understand what these benefits cost.  Congressional debates on such issues actually help to increase the understanding and the transparency of our government’s rules and regulations.  But Congressional action can be difficult and tedious, and also time-consuming.  The new administration will have to work with Congress, which may not always be quick or easy.

As US Senate majority leader Mitch McConnell noted in May of 2016, “On issues of great national significance, one party should never simply force its will on everybody else….because [if] achieved through persuasion and, ideally, on a bipartisan basis…..[then changes] will be more durable when they do arrive.”  McConnell also pointed out that only one major piece of legislation in America’s history has ever passed the US Senate without a single supporting vote from the minority party, and that was in 2010.  We will find out soon just how open and inclusive the legislative process will be in 2017.

The new administration will also face challenges from an aging population, weak rates of productivity, and the vagaries of international trade and currencies.  Incremental spending on capital improvements may mitigate some of these issues, but for some reason the words “smooth sailing” and “Donald Trump” don’t often appear together.  We can expect surprises in 2017 and perhaps multiple changes in the direction that our new administration charts.

Mr. Trump did begin the New Year with momentum and support in many areas.  January’s announcement that the National Federation of Independent Business’s index increased to 2004 levels suggests that small businesses are now materially more optimistic than they were last November.  And 29% of these small business owners expect to increase capital expenditures within the next six months.  Such expenditures should support additional job growth in the U.S. economy.

Corporate earnings results will also be released over the next month, and given the stock market’s strong rally, any earnings disappointments will likely be met with sharp sell-offs in market prices.  While investors have enjoyed the recent rally in stock prices, these higher prices have also priced in some higher expectations.  Given the probability of new surprises in 2017, we expect the markets to be more volatile in 2017 than was the case for most of 2016.

At SKY, we plan to stick to our knitting and hope to minimize the impacts from the new surprises that will surely be seen.  While the future is always unknown, having investments in solid and productive assets always helps.  Hopefully, the stock market’s confidence is well-founded and long-lasting.  At least we all started 2017 from a higher base, which will help cushion this year’s shocks and surprises.

Best Wishes to all for a healthy and prosperous New Year, and please do let us know if you have any questions or would like to visit.