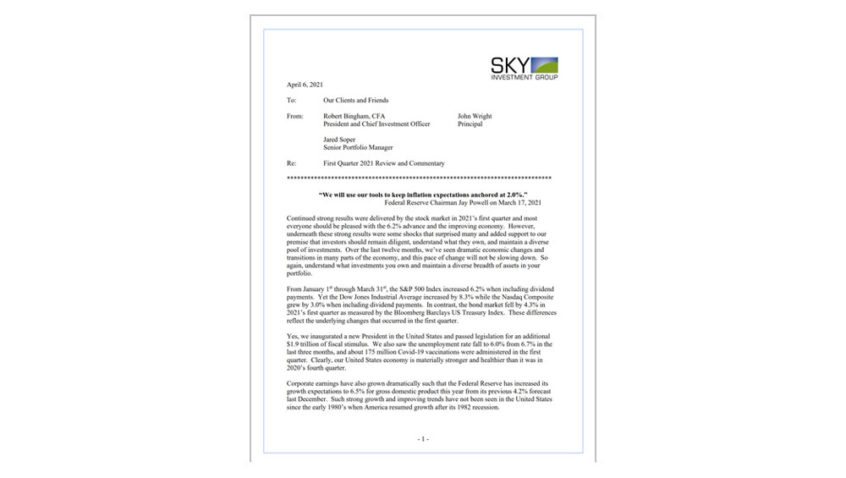 “We will use our tools to keep inflation expectations anchored at 2.0%.”
– Federal Reserve Chairman Jay Powell on March 17, 2021

Continued strong results were delivered by the stock market in 2021’s first quarter and most everyone should be pleased with the 6.2% advance and the improving economy. However, underneath these strong results were some shocks that surprised many and added support to our premise that investors should remain diligent, understand what they own, and maintain a diverse pool of investments. Over the last twelve months, we’ve seen dramatic economic changes and transitions in many parts of the economy, and this pace of change will not be slowing down. So again, understand what investments you own and maintain a diverse breadth of assets in your portfolio.

From January 1st through March 31st, the S&P 500 Index increased 6.2% when including dividend payments. Yet the Dow Jones Industrial Average increased by 8.3% while the Nasdaq Composite grew by 3.0% when including dividend payments. In contrast, the bond market fell by 4.3% in 2021’s first quarter as measured by the Bloomberg Barclays US Treasury Index. These differences reflect the underlying changes that occurred in the first quarter.

Yes, we inaugurated a new President in the United States and passed legislation for an additional $1.9 trillion of fiscal stimulus. We also saw the unemployment rate fall to 6.0% from 6.7% in the last three months, and about 175 million Covid-19 vaccinations were administered in the first quarter. Clearly, our United States economy is materially stronger and healthier than it was in 2020’s fourth quarter.

Corporate earnings have also grown dramatically such that the Federal Reserve has increased its growth expectations to 6.5% for gross domestic product this year from its previous 4.2% forecast last December. Such strong growth and improving trends have not been seen in the United States since the early 1980’s when America resumed growth after its 1982 recession.

Bloomberg Finance’s consensus estimate for S&P 500 companies in 2021 also increased by 5% over the past three months. And consensus earnings are expected to increase by 14% in 2022 and by 11% in 2023 over previous year levels. But underneath all these positives were some events that bear watching.

In January, GameStop, symbol “GME”, appreciated 10-fold before declining by 90%. Other small and lightly followed companies saw similar market moves as hedge funds had to cover short positions and meet margin calls. A Congressional hearing was held as legislators learned about custodian practices, Security & Exchange Commission rules, and why some investors lost money in the stock market.

Then in February, a US Treasury bond auction “failed.” While those bonds did get priced and sold, the clearing price was much lower than expected. Treasury yields for 10-year bonds moved dramatically higher in the first quarter from 0.9% as 2021 began to 1.7% at the end of March – a 94% increase. Higher yields have been anticipated, but not with the rapidity as seen during February and March.

Fortunately, at its March 17th meeting, Federal Reserve Chairman Powell did a good job assuaging market fears about the Fed’s plans to increase interest rates as warranted, but not before. Nonetheless, yields drifted higher.

Then as the first quarter ended, President Biden announced plans for an additional $2.3 trillion spending program supported by $1.5 trillion in additional taxes. While this proposal will be crafted and finalized over the next 4 or 5 months, another spending bill for a supplemental $1 trillion or $2 trillion is already being planned as a follow-on.

Clearly, this is a lot of money and the largest spending program the United States has ever seen. And perhaps it may all be needed and justified, but bond investors will want to get paid to support this legislation. Prospectively, these spending programs could increase our country’s outstanding debt by 15%. So, investors should expect interest rates to go higher. The questions will be: by how much, and when.

A tug of war began anew between the bond market and the U.S. government in 2021’s first quarter. We expect this battle will go back and forth over the next year or two. Analysts are therefore now beginning to analyze statement omissions as well as actual words said. For instance, after the Fed’s March 17th meeting, Chairman Powell talked about the stronger rates of economic growth, the falling rates of unemployment, and a “transitory” 2.5% rate of inflation. But there was no suggestion or comments made that interest rates might need to be increased sooner than initially forecasted; that is in 2022 or 2023 rather than in 2024.

Some would argue the Federal Reserve (and the United States Government) are beholden to the US bond market and can not afford to surprise or to disappoint US bond investors. No one wants the expense nor the pain from a dramatic increase in interest rates. Witness the bond market “tantrum” of 2013.

Hence, investors have been told to expect continued monthly buying of US bonds for another year or so by the Federal Reserve. Such steps could bring the Federal Reserve’s portfolio of US bonds up towards $10 trillion, or nearly 50% of America’s gross domestic product. Such steps may be warranted, but bond investors will have that many more reasons to demand more yield. Higher interest rates could however also bring additional bond buyers into the market and help keep rates from increasing greatly.

So although the stock market had a strong first quarter, and economic trends are strongly improving, cross currents remain in the markets. Yes, we should expect interest rates to move higher as the economy grows and strengthens. But the Federal Reserve must also manage investor expectations so markets don’t get unsettled from dramatic increases in interest rates.

And as seen in the adjoining graph, the yield on the 10-year Treasury has moved higher from its lows of 0.60% in July 2020 to its 1.75% rate on April 2nd. But the graph also reminds us that we should expect the 10-year yield to exceed 2.5% as the economy continues to recover over the next many months. Improving economic trends, pent-up consumer demand to travel, go to restaurants, ballparks and theaters, will further stimulate our economy just as government spending increases further. Meanwhile the Federal Reserve must convince investors that they have both the tools, and the acumen, to contain inflation while also differentiating between “transitory” inflation and “embedded” inflation.

The strong recovery over the past year has already increased demand for labor, and wages have already increased by 5% over 2020 levels. Yet only 7 of 18 Federal Reserve Bank Presidents and Governors have thus far indicated that higher interest rates may be needed before 2024. This premise will be challenged directly by bond market investors over the next year.

But, to date, interest rates have increased for the right reasons. Markets are repricing the cost of economic growth just as this growth is increasing corporate expenditures and companies meet the increased demand.  This growth in the United States is also encouraging foreign investors to invest in the United States, particularly since so many economies still have negative real rates of interest.  America’s strength is attracting additional investors.

Accordingly, the stock market has continued to look attractive.  Market volatility has also remained tame.  But underlying crosscurrents remain a concern and need to be watched.  Surprises will occur, as witnessed last year – but hopefully without the severity of what we saw in 2020.  More importantly, if this strong economic growth continues, the stock market will have the support to grind upwards as has happened in the United States for the last 120 years.

Do let us know if you have any questions, and we wish you all a happy and healthy spring.  Get vaccinated!

Securities noted above valued as of the market close on April 5, 2021: