“We can get fuzzed about political risks these days because it occupies the headlines. Underneath that, we have a pretty benign macro environment that shows a recovery and good consumer and business confidence.”
– Urban Angehrn, Zurich Insurance Group Chief Investment Officer

The stock market had a very strong first quarter in 2017 with the S&P 500 Index gaining 6.1% when including dividend payments.  The Dow Jones Industrial Average also gained 5.2% in the first quarter and the NASDAQ Composite Index advanced by 10.1% when including dividends.  The bond market was much more subdued however with the BofA Merrill Lynch US Corporate & Government Index appreciating by 1.0%.

These market trends were superb and were some of the best quarterly results of the past five years.  Market pundits have described this strong market as the Trump Rally, or a reflation move, but in our opinion those are the wrong descriptors.  Instead, we believe the market’s move reflects improving corporate profits and better growth trends. 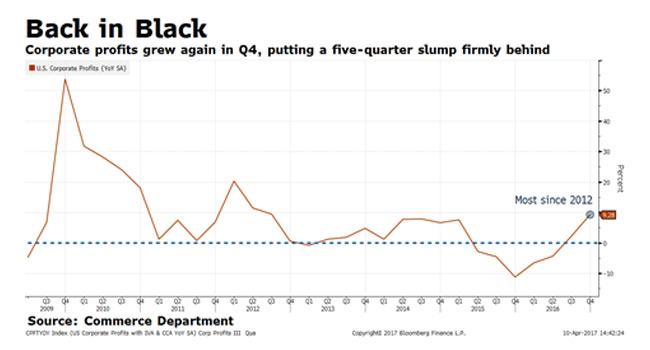 As mentioned in our previous quarterly letters, corporate earnings have been improving over the last few quarters.  In 2016’s fourth quarter, corporate earnings on a pre-tax basis increased 9.3% over the fourth quarter earnings of 2015.  This 9.3% increase was the best quarterly increase in the United States since 2012.  It was also the second quarter in a row with a positive quarterly comparison.  Previously, in 2015 and the first half of 2016, the comparisons were negative.  As the adjoining graph shows, only twice during this decade have US corporate profits increased at such strong rates.

Importantly, this positive trend is expected to continue in April as per share earnings are expected to grow by 9.1% in 2017’s recently completed first quarter according to FactSet.  Such earnings growth makes stocks more valuable since the improved earnings give shareholders better returns on their investments.  Stocks tend to trade in concert with expectations for these earnings.  Research work done by Jeffrey Kleintop, Charles Schwab’s Chief Global Investment Strategist, depicts that correlation on a worldwide basis.

The graph compares analysts’ earnings estimates to stock market values of the Morgan Stanley CIAC World Index.  One can see how the weak markets of early 2016 rebounded as earnings expectations improved. 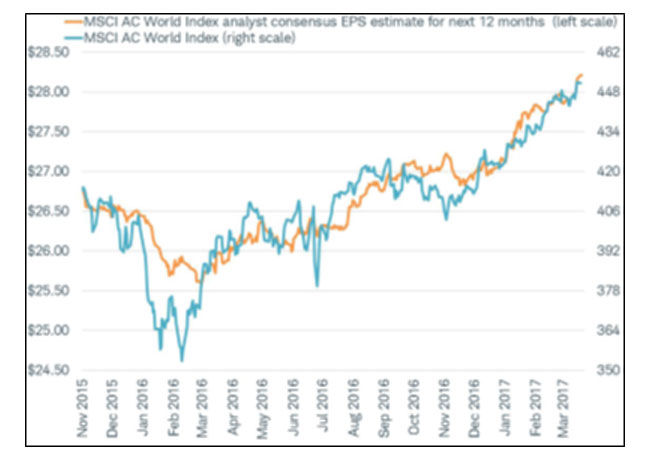 In the next graph, again from Charles Schwab, Kleintop’s research depicts the close correlation between the growth of nominal gross domestic product and corporate sales. 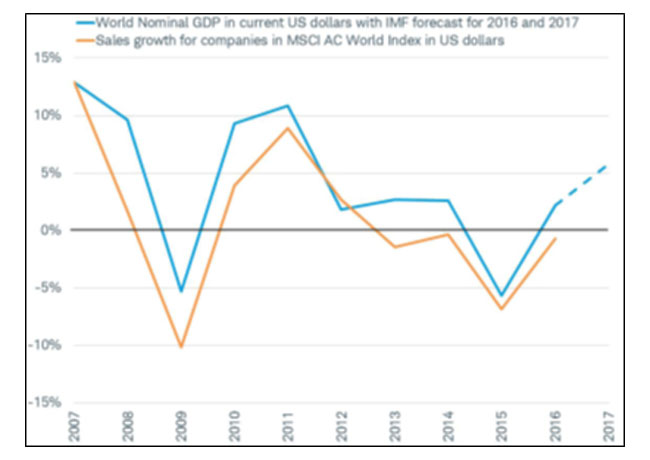 Growth rates matter.  And stock markets have rewarded shareholders for these improving trends.  But the markets also want to see these trends continue.  During March, analysts’ earnings estimates have been revised upwards again for the second, third and fourth quarters of 2017.  Obviously, estimates can change, but these favorable economic trends have supported the higher stock markets.

Improving sales volumes lead corporations to expand their production facilities, make new capital investments and hire additional employees.  In the United States, sales growth is usually tied to consumer spending trends which have been improving over the last twelve months.  Yet, in 2017’s first quarter, consumer spending rates slowed down.  Automobile sales growth slowed, and the warm winter reduced heating and utility purchases.  So, gross domestic product numbers for 2017’s first quarter are expected to approximate 1.3% – quite a bit less than the fourth quarter rate of 2.1%.

However, job growth trends remain healthy, and unemployment levels have come down further.  The low 4.5% unemployment rate will continue to bring more workers into the work force.  The labor force participation rate also continues to improve as does the underemployment rate.  Importantly, nearly 3 million more people are working now in the United States than was the case one year ago.

With more people working, income levels in our country grow as does our country’s overall spending power.  Bloomberg Finance reported that recent gains in household incomes have been the strongest in nearly two years.  Such trends have increased domestic savings rates, which again improve household balance sheets and prospective purchasing power.  Any improved tax policies, or easier terms on the repatriation of foreign profits for American companies, will simply augment these improving economic trends.

We also know that improving trends can be interrupted, or negatively impacted by increasing global tensions, conflicts or trade wars.  Clearly our new administration will be less predictable than previous administrations, but the world may also benefit from some renewed leadership.  And recent statements from our administration about international trade, or about renegotiating the NAFTA accord with Canada and Mexico, have been more modest and limited in scope.  The interdependency and complexity of international trade also reduces the likelihood that a single decision will greatly alter the world’s flow of commerce.  Schwab’s Kleintop has spent time with Commerce Secretary Wilbur Ross and considers him to be deliberate, analytical, and thorough in his decision-making style – and someone to whom President Trump listens and respects.

Others also believe that we face a pending recession, or that the Federal Reserve’s recent push to raise interest rates will interrupt this improving economic growth.  However, most economists argue that before a recession might occur, the bond market usually inverts with short-term interest rates reaching higher levels than long-term interest rates.  Some economists also argue that such an inverted yield curve has predicted each of the last seven recessions over the past fifty years with 100% accuracy.  Hence, the likelihood of a recession in the next two years appears doubtful to us at this point.

That said, exogenous events, or sudden calamities, are always possible.  International conflicts will always be with us and horrific events like 9/11, or JFK’s assassination, do occur.  But fundamentals matter, and as was seen after both of those horrific events, the underlying strength in the economy continued to carry those stock markets higher.  In both 2001 and 1963, the Dow Jones Industrial Average continued to rise and finished those two respective years at higher levels than when those tragedies occurred.

However, no one should expect the stock market’s climb to be steady, uniform, or comfortable.  Price volatility should always be expected as investors react to news, revise expectations, or adopt new strategies.

Markets also rotate through cycles, which means at various times different market sectors will transition from being in favor to being out of favor.  For instance, in 2016’s fourth quarter, bank stocks increased by 30% as measured by the Keefe Bank Index.  Yet in this year’s first quarter, bank stocks only increased by 0.7% versus the S&P 500’s 6.1% increase.  Effectively, world markets change continuously, and investors should always expect surprises, new directions, and the possibility of a 10% market correction.

At SKY Investment Group, we try to invest conservatively and we look at market reversals as opportunities.  We track market moves and sector rotations as they occur.  Such changes create investment opportunities for us all.  While risks are always prevalent in the market, investors do need to embrace some level of risk to earn a rate of return.  A portfolio invested in a diverse group of above-average companies should provide reasonable rates of return over time, while also helping investors sleep well at night.

Do let us know if you have any questions or would like to visit.  Happy Spring!!