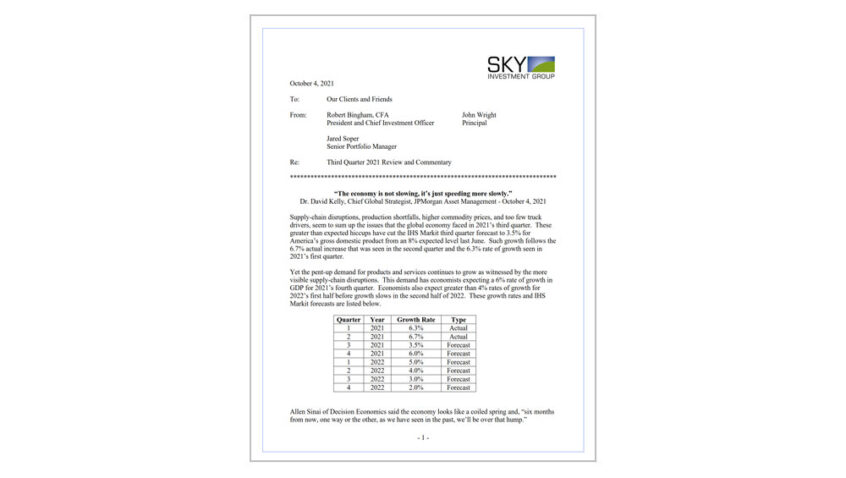 Supply-chain disruptions, production shortfalls, higher commodity prices, and too few truck drivers, seem to sum up the issues that the global economy faced in 2021’s third quarter.  These greater than expected hiccups have cut the IHS Markit third quarter forecast to 3.5% for America’s gross domestic product from an 8% expected level last June.  Such growth follows the 6.7% actual increase that was seen in the second quarter and the 6.3% rate of growth seen in 2021’s first quarter.

Yet the pent-up demand for products and services continues to grow as witnessed by the more visible supply-chain disruptions.  This demand has economists expecting a 6% rate of growth in GDP for 2021’s fourth quarter.  Economists also expect greater than 4% rates of growth for 2022’s first half before growth slows in the second half of 2022.  These growth rates and IHS Markit forecasts are listed below. 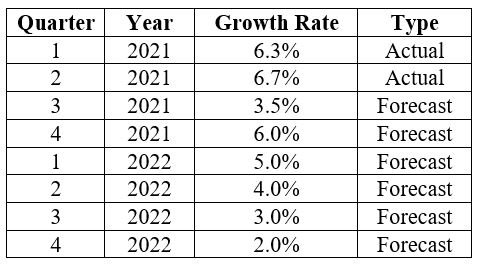 Allen Sinai of Decision Economics said the economy looks like a coiled spring and, “six months from now, one way or the other, as we have seen in the past, we’ll be over that hump.”

The supply-chain disruptions have had a real impact, however.  Last spring, lumber prices sky-rocketed to $1,711 per thousand board feet on the futures market.  That price was up nearly five-fold from the average $357 futures price seen between 2015 and 2019.  And, yes, last spring’s exorbitant price did drop back down this past summer to that five-year average level.  But in September, lumber futures prices jumped back up to $627 per thousand board feet.

This recent increase in lumber prices was driven in part by the wildfires out west and in Canada that forced sawmills to cut back operations.  A broad rally in commodities also contributed as natural gas prices increased by more than 60% in the third quarter, taking oil prices higher along with aluminum, steel, and solvent prices.  Hurricane Ida reduced energy supplies as well, while the drought out west also increased prices for oat futures and other grains.

Turns out, global inventory levels of natural gas are lower now than at any time over the last five years.  Great Britain decided to close down its primary storage facility in 2017.  And now the United Kingdom only keeps about one week’s worth of natural gas stock on hand, while Germany and France usually store about three months’ worth of supply.  But even in the United States, inventory levels are below their five-year averages.  With a cold winter expected, natural gas prices may increase further.

This change in carried inventory levels reflects the just-in-time approach that has dominated global manufacturing tactics the last several decades.  Growth in renewable energy supplies also cuts back the perceived need to carry inventories.  And China’s increased use of natural gas in place of coal further depleted international supplies.  Wind turbines in the U.K. also sat idle at the end of the summer as wind levels fell materially.  So, wind energy only contributed 2% of the U.K.’s power generation in late summer versus a comparable 24% in 2020.

Shipping delays have also added to the disruptions.  According to eeSea, “there were 578 large container ships waiting to dock outside ports in Asia, Europe, and North America” on September 23, 2021.  They also reported that vessel delays in August on the west coast of North America increased to 10 days from 14 hours in June of 2020.  The Los Angeles and Long Beach ports in California “together handle more than one-third of U.S. seaborne imports” according to the Boston Consulting Group, and volumes have been 30% greater in 2021 than in 2020.  In Savanna, Georgia, the 4th most active port in the U.S., 24 ships awaited a berth on September 28, 2021.  This port has also seen a 30% increase in imports during 2021 and is an important distributor for both the Midwest and Southeast.

This increased demand has burdened the entire distribution system from shipping lines to port workers, truck drivers, warehouse operators, and freight trains.  All parts of the chain suffer from too few workers, and the huge increase of shipping containers, either full or emptied, have crowded the ports and restricted mobility.  Cushman & Wakefield reported that 96% of all warehouses in the western United States are full – and 98% of those in southern California.

Truck drivers in particular have been in short supply as Amazon, Walmart, FedEx, DHL, and UPS all compete for drivers.  In the West Texas oil fields, drivers can earn $130,000 salaries and receive bonuses, benefits, and housing.  Starting pay for warehouse workers has also increased 8.9% year over year to $16.58 an hour last April according to ProLogistix.  Their Senior Vice President of Logistics Brian Devine noted, “our recruiting costs have doubled, we’re advertising more.…. everything from help-wanted yard signs to drive-through job fairs.  Radio campaigns, billboards, we’re pulling out all the stops.”  Not surprisingly, FedEx had $450 million in additional operating expenses in their most recent earnings quarter.

So higher costs, more bottlenecks, and product shortages have hurt the supply chains.  Nike reported on September 23, 2021 that their shipments from Asia to North America now take 80 days, up from 40 days before the pandemic.  They may not have enough sneakers for holiday-season sales.  Costco has also reimposed limits on the number of paper towel packages consumers can purchase.  And prices for artificial Christmas trees have increased 25% this year, according to The Wall Street Journal.  Consulting firm AlixPartners notes that car manufacturers will also sell fewer cars and lose some $210 billion in revenue this year, due in part to microchip shortages.

All of these factors have pushed rates of inflation above 5% in 2021, although the core rate of inflation, excluding volatile food and energy categories, was up 3.6% in August on a year-over-year basis.  And this core inflation rate has been steady at 3.6% for the last three months.  As Federal Reserve Chairman Jerome Powell said on September 29, 2021, “the current inflation spike is really a consequence of supply constraints meeting very strong demand.  And that is all associated with the reopening of the economy, which is a process that will have a beginning, middle and an end.”  He does expect the supply-chain bottlenecks to continue into 2022.  Accordingly, Blackrock’s Vice Chairman Dr. Philipp Hildebrand declared on October 1,  “inflation will be both transitory and persistent” and settle in at higher rates than before the pandemic.

Consequently, interest rates trended higher in the third quarter as the 10-year Treasury yield climbed above 1.5% in September.  This followed the Federal Reserve’s announcement on September 22, 2021 that they will begin “tapering” their purchases of government securities at the end of this year.  Most analysts then expect the Federal Reserve to raise interest rates in the fall of 2022.

It’s no wonder that, with all these cross currents, the Dow Jones Industrial Average and the Nasdaq traded down in the third quarter.  That being said, the broader S&P 500 Index increased by 0.6% in the third quarter when including dividends.  And the bond market was effectively unchanged in the quarter as measured by the Bloomberg’s US Treasury Index.  Refinitiv Lipper calculated that the average U.S. stock fund fell by 1% in the third quarter.

Fortunately, the fourth quarter appears to be off to a good start as consumer sentiment has improved, concurrent with lower infection rates from the Delta variant.  Consumer spending increased at a 9.6% annual rate in August and ISM’s Manufacturing Index also increased nicely in September.  Americans’ rate of savings remains unusually high as well at 9.4% which will support additional consumer spending.  Market research from The NPD Group suggests 30% of Americans are planning to spend more this year for the Holidays than they did in 2020.

Third quarter corporate earnings will also be released in October and the results should be very good.  Refinitiv Lipper expects S&P 500 companies to report a 29.6% increase on a year-over-year basis.  Profit margins are expected to have held up well as strategists at both Zacks Research and UBS Securities believe that finished goods prices have risen at a faster rate than companies’ increases in operating expenses.  So, even if the growth rate of corporate earnings declines from second quarter levels, investors will still have reasons to be pleased.

December 3rd (extended from October 18th) does however loom as a deadline given Congress’ inability to pass legislation.  America’s debt ceiling needs to be increased so our Treasury can continue paying our country’s bills.  Yet for political reasons, our legislature has chosen not to address this issue singularly.  Instead, a multitude of preferences are being addressed concurrently.  Perhaps Congressional tactics will change, but the lack of time and singular focus may temporarily unsettle the investment markets.  Extending unlimited spending authority could also upset markets.

As a result, plenty of market uncertainties persist.  Supply-chain difficulties continue, higher prices are being paid, and energy prices are expected to remain elevated.  Inflation has trended higher, and interest rates will continue to move higher over the next twelve months.  But the economy’s footings are in excellent shape, and economic growth will continue.  Yes, growth is expected to slow, but incremental job growth from an expanding economy could supplement future economic growth rates.  And historically, 3% growth rates for the economy have been viewed attractively.

Hence, market corrections should be expected, but we continue to think the stock market will be higher twelve months from now than it is today.  Do let us know if you have any questions, and, please, stay well everyone.

Securities noted above valued as of the market close on July 2, 2021: