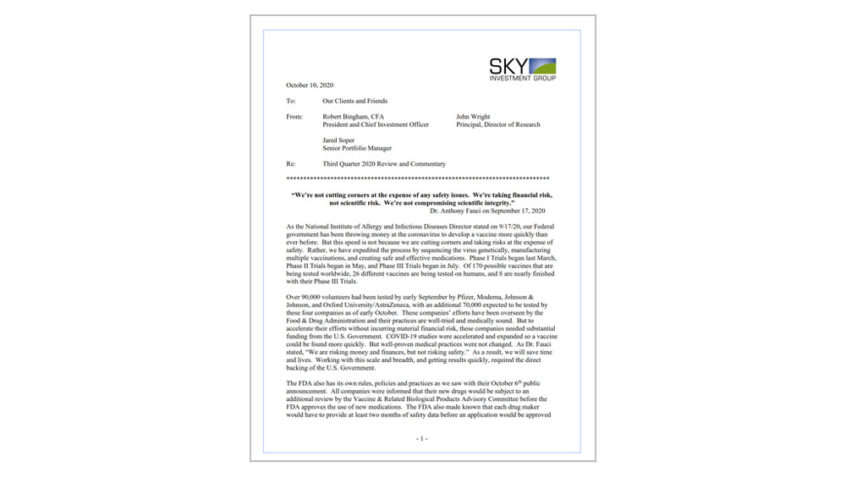 As the National Institute of Allergy and Infectious Diseases Director stated on 9/17/20, our Federal government has been throwing money at the coronavirus to develop a vaccine more quickly than ever before.  But this speed is not because we are cutting corners and taking risks at the expense of safety.  Rather, we have expedited the process by sequencing the virus genetically, manufacturing multiple vaccinations, and creating safe and effective medications.  Phase I Trials began last March, Phase II Trials began in May, and Phase III Trials began in July.  Of 170 possible vaccines that are being tested worldwide, 26 different vaccines are being tested on humans, and 8 are nearly finished with their Phase III Trials.

Over 90,000 volunteers had been tested by early September by Pfizer, Moderna, Johnson & Johnson, and Oxford University/AstraZeneca, with an additional 70,000 expected to be tested by these four companies as of early October.  These companies’ efforts have been overseen by the Food & Drug Administration and their practices are well-tried and medically sound.  But to accelerate their efforts without incurring material financial risk, these companies needed substantial funding from the U.S. Government.  COVID-19 studies were accelerated and expanded so a vaccine could be found more quickly.  But well-proven medical practices were not changed.  As Dr. Fauci stated, “We are risking money and finances, but not risking safety.”  As a result, we will save time and lives.  Working with this scale and breadth, and getting results quickly, required the direct backing of the U.S. Government.

The FDA also has its own rules, policies and practices as we saw with their October 6th public announcement.  All companies were informed that their new drugs would be subject to an additional review by the Vaccine & Related Biological Products Advisory Committee before the FDA approves the use of new medications.  The FDA also made known that each drug maker would have to provide at least two months of safety data before an application would be approved under their Emergency Use Authorization program.  This announcement could delay the release of any vaccine by a month or two.  But Pfizer, who is the farthest along with their vaccine testing, may be able to meet these FDA requirements by the end of October.

Other companies like Regeneron and Eli Lilly have focused their energies on developing antibody therapies. “Monoclonal antibodies are artificial versions of proteins the immune system naturally makes to fight off infections,” stated Regeneron’s CEO, Dr. Leonard Schleifer, on October 5th.  Such medications block the coronavirus’ spike protein which accelerates the body’s ability to fight COVID-19.  Successful use of these drugs under the FDA’s Compassionate Use Program have led both Regeneron and Eli Lilly to request FDA permission to distribute more broadly these drugs under the FDA’s Emergency Use Program.  Eli Lilly has stated that it has 100,000 doses currently available and perhaps as many as 1 million doses available by December 31st.  Dr. Schleifer stated that antibody therapies are “an extremely safe class of drugs.”

Our scientists have worked hard and have produced new medications that are currently saving lives.  Regeneron, remdesivir, and dexamethasone reduce inflammation and provide antibodies to help immune systems combat disease.  For seven months, doctors and the medical profession have been fighting COVID-19, improving their tactics and approaches, and reducing morbidity rates.  Ventilators have been replaced as the go-to solution, and all of us benefit from the new therapies, new approaches, and improved tactics.

The promising prospects that COVID-19 is now better understood and better managed, have given governments reason to open up communities again.  Hospitals are not as overwhelmed as last March, and more people are back to work.  There are more vehicles on the roads, and our economy is growing again.  These improvements have caused the stock market to rebound, and in fact, establish new market highs, as was seen in early September.

Now, clearly, we are not out of the woods yet and the widespread distribution of a COVID-19 vaccine is still months away; but much progress has been seen on many fronts.  Accordingly, the markets believe that the worst is behind us.  Yet we need to remember that markets do not travel in one-way directions, and many uncertainties still do exist. However, science is working, and this pandemic will be corralled over the next year.

But what about those uncertainties such as the need for many more jobs, economic growth, company earnings, and the pending elections?  First, the economic recovery has been real and very substantial.  America’s gross domestic product fell by an annualized rate of 31.2% in the 2nd quarter, and now the 3rd quarter is expected to have grown by about 30% while this year’s 4th quarter is expected to grow between 2% to 4%.  Our economy was shut down, and this process caused 22.4 million people to lose their jobs.  Our nation’s unemployment rate jumped accordingly to 14.7% last spring from 3.5% last February.

But as people have gone back to work and economies partially reopened, about 12 million people have been re-hired and our nation’s unemployment rate had fallen to 7.9% as of 10/2/20.  Never in our country’s history have we had an economic recovery of this speed and of this magnitude.  Credit Suisse calculated that America needed most of 4 years to recover from each of the previous three recessions of 1990, 2000 and 2008.  And currently, analysts expect the United States to recover in two years from this year’s recession.  While that is certainly good news, this recession has hit the least educated segment of the population the hardest. Statistics show that 68% of all the lost jobs were those with lower wages.  Hence, we need a return of the restaurant and travel & leisure industries to complete our economy’s rebound.  But, fortunately, tens of thousands of warehousing jobs are being added as companies improve their distribution and fulfillment capacities.  And courier and messenger companies added 10,300 jobs in September as homes and businesses receive more packages.  Trucking companies also added 4,600 new positions in September.

Corporate earnings have also held up better than expected during this malaise.  Global financial data provider, Refinitiv, calculated that the earnings for the S&P 500 companies declined by 31% in this year’s 2nd quarter from their 2019 levels.  Yet analysts had expected 2nd quarter earnings to decline by 43%.  And in this year’s 3rd quarter, analysts are expecting the S&P 500 companies’ earnings to decline by about 20%.  So negative expectations persist, given the huge economic overhang from this year’s first half.

Consequently, our government leaders continue to talk about adding more fiscal stimulus to our economy.  On Friday, October 9th, the Trump administration suggested the Federal government spend an additional $1.8 trillion on coronavirus relief programs.  This contrasts with a $2.2 trillion program offered by our House of Representatives and follows the $3 trillion previously extended last spring.  There are obvious pros and cons to all these programs, but, interestingly enough, our country’s savings rate as a percent of disposable personal income has shot up to record highs.  This savings rate was at 14% in August after having exceeded 20% last spring.  For most of 30 years from 1980 through 2010, our country’s saving rate was less than 5%.

Some of these savings are being spent as people leave apartments, buy homes, and/or move to the countryside.  CNN Business reported on October 7th that mortgage applications to buy homes were up 21% from the levels seen in 2019.  And mortgage data company Black Knight stated that the mortgage lending volumes in the first half of 2020 nearly equaled the $1.82 trillion record levels last seen in 2003.  People often purchase furniture and appliances for their homes as well, so positives are being seen.  Automobile purchases have also returned to pre-COVID levels, while discretionary purchases on restaurants, travel and elective surgeries have continued to be weak.

Nonetheless, overall earnings expectations for the S&P 500 companies have rebounded.  In 2019, these companies generated $165 per share in earnings. Expectations for 2020 went from $185 to $120 per share over the six months ending last March.  As of early October, analysts were expecting these S&P 500 companies to generate $135 of earnings for 2020 and $160 per share in earnings for 2021.  Obviously, we’ll have to wait and see, but at least much progress has been made after the horrific beginning to 2020.

Now what about the upcoming elections?  The betting public, as defined by PredictIt and FiveThirtyEight, both expect Joe Biden to be our next President.  As of October 3rd, PredictIt suggested Biden had a 67% chance of becoming President, the Democrats had an 88% chance of controlling the House, and 70% chance of controlling the Senate.  But as of October 3rd, PredictIt only suggested a 58% chance that the Democrats would control both houses of Congress and the Presidency.  FiveThirtyEight calculated an 81.2% probability that Joe Biden would win the Presidency as of October 3rd.

Biden’s lead over Trump seems to have grown as of early October, which diminishes the likelihood of a contested election.  Most analysts believe the election results will be known within days of November 3rd, or perhaps weeks, but not months.  Yes, it will take time to count all the ballots, and yes, results from several states may likely be contested.  But each state has its own process to appoint their representatives for the Electoral College vote on December 8th, and we think that will happen even with a multitude of opinions, inuendo, and rancor.  Our constitutional process works, and much as we recovered from those “hanging chads” of 2000, America will move on from this election.

Political parties also change and adapt as economic and demographic circumstances dictate.  For instance, in 2020, Republicans voted for paid sick leave, guaranteed minimum income levels, and moratoriums on paying bills – new stances for the Grand Old Party.  So as the Wall Street Journal’s Jon Sindreu wrote on October 3rd, “This year above all, investors have little to gain by looking too closely at the presidential election.”  Charles Schwab’s Chief Investment Strategist Liz Ann Sonders stated on October 5th, “The economy impacts elections more than elections impact the economy.”  While JPMorgan Private Bank’s Grace Peters said on September 29th, “Company earnings are more important in driving share prices than political change, especially when looking out over the longer term.”

And most positively, Barron’s Ben Levisohn calculated that the stock market has generated a +1.6% average gain during October over the last 20 years and finished higher 70% of the time.  So again, we suggest that investors “Forget about what the stock market is going to do.  Instead, focus on what you, as an investor, ought to do,” courtesy of Benjamin Graham.

Enjoy October everyone, and do get your flu shot this season.  We look forward to hearing from you!

Securities noted above valued as of the market close on October 9, 2020: