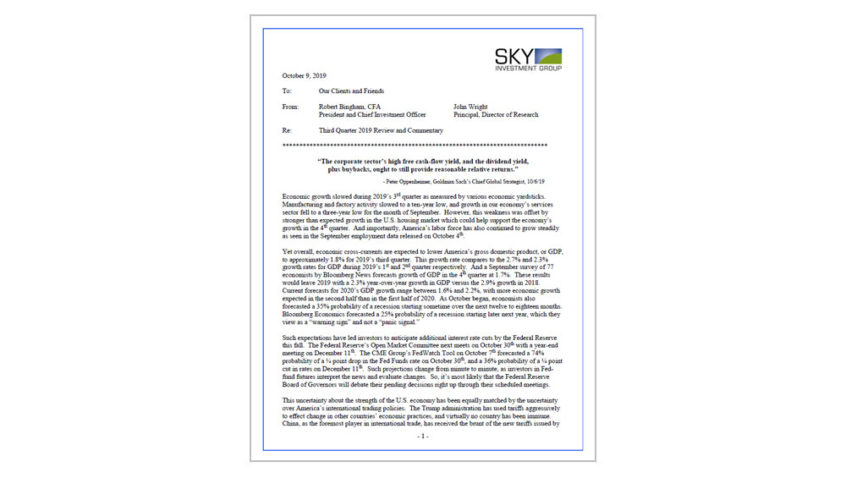 Economic growth slowed during 2019’s 3rd quarter as measured by various economic yardsticks.  Manufacturing and factory activity slowed to a ten-year low, and growth in our economy’s services sector fell to a three-year low for the month of September.  However, this weakness was offset by stronger than expected growth in the U.S. housing market which could help support the economy’s growth in the 4th quarter.  And importantly, America’s labor force has also continued to grow steadily as seen in the September employment data released on October 4th.

Yet overall, economic cross-currents are expected to lower America’s gross domestic product, or GDP, to approximately 1.8% for 2019’s third quarter.  This growth rate compares to the 2.7% and 2.3% growth rates for GDP during 2019’s 1st and 2nd quarter respectively.  And a September survey of 77 economists by Bloomberg News forecasts growth of GDP in the 4th quarter at 1.7%.  These results would leave 2019 with a 2.3% year-over-year growth in GDP versus the 2.9% growth in 2018.  Current forecasts for 2020’s GDP growth range between 1.6% and 2.2%, with more economic growth expected in the second half than in the first half of 2020.  As October began, economists also forecasted a 35% probability of a recession starting sometime over the next twelve to eighteen months.  Bloomberg Economics forecasted a 25% probability of a recession starting later next year, which they view as a “warning sign” and not a “panic signal.”

Such expectations have led investors to anticipate additional interest rate cuts by the Federal Reserve this fall.  The Federal Reserve’s Open Market Committee next meets on October 30th with a year-end meeting on December 11th.  The CME Group’s FedWatch Tool on October 7th forecasted a 74% probability of a ¼ point drop in the Fed Funds rate on October 30th, and a 36% probability of a ¼ point cut in rates on December 11th.  Such projections change from minute to minute, as investors in Fed-fund futures interpret the news and evaluate changes.  So, it’s most likely that the Federal Reserve Board of Governors will debate their pending decisions right up through their scheduled meetings.

This uncertainty about the strength of the U.S. economy has been equally matched by the uncertainty over America’s international trading policies.  The Trump administration has used tariffs aggressively to effect change in other countries’ economic practices, and virtually no country has been immune.  China, as the foremost player in international trade, has received the brunt of the new tariffs issued by the United States.  Efforts to negotiate some compromise with China resumed in early October, but incremental demands by the United States may limit the scope of any compromise.  Yet as Bloomberg’s Cameron Crise argued on October 7th, the stock market has been more concerned about a recession than the spate of America’s trade talks.  The adjoining graph depicts some moderating trends for a basket of trade dependent securities versus the increased concerns for a recession in the United States.

Certainly, the uncertainties about the strength of the U.S. economy, in conjunction with the current trade war, are not helping stock prices.  Yet markets tend to discount back future prospects, and the market’s decline in early October suggest these concerns have increasingly been priced into market values.  We would also argue that no matter what (if any) trade agreements are made, additional trade issues will crop up, be argued and debated, with varying consequences and impacts.  Our government has found a new tool to influence world trading practices – and this tool will most likely be used by whomever serves as our country’s next President.

Alongside these issues, corporate earnings will be released during October and November.  As of October 7th, negative surprises had been issued by Federal Express, Wynn Resorts, Macy’s, Tyson Foods and several others.  But PepsiCo reported better than expected results.  More importantly, investors want to hear CEO concerns and expectations for the months ahead.  These comments will help shape the stock market’s direction and degree of volatility.  Yes, there are many uncertainties and unknowns ahead, but economic growth is expected to continue even if “the economy is gradually cooling,” as described by Lydia Boussour, Oxford Economist’s Senior U.S. Economist.

Such spending is supported by the increased wages American workers have earned over the last five years.  The graph below shows the increases in Average Hourly Earnings for all employees in the United States over the last twelve years.

As presented, wage growth has improved materially over 2014 levels.  This improvement reflects the growth in employment as our economy has grown.  With more people working, and unemployment at a 50-year low, wages have grown strongly.  And as the Bureau of Labor Statistics has noted, average hourly earnings for American workers has outpaced the growth in inflation for the last four years.

Interestingly, along with consumers’ improved spending power, the personal consumption expenditure data showed Americans buying bigger ticker items like cars and houses.  Specifically, the U.S. Bureau of Economic Statistics showed that last summer’s growth in retail sales was supported by a 1.8% jump in automobile purchases, along with strong purchases in home furnishings, household durables and building materials.  New home sales were also unusually strong last August, as was the list of signed contracts for pending home sales.  Bloomberg Economics has noted that home sales and real estate activity have not contributed positively to GDP since the 4th quarter of 2017.  But perhaps that trend has changed.  Consumers have also been spending less on food and dining out, while rates of savings, at 8% of income, have remained at historically high levels.

Spending money on larger and longer lasting purchases suggest that consumers are relatively confident about their future and their near-term prospects.  This confidence was reflected in the improved consumer sentiment figures that the University of Michigan released on September 27th.  And while these numbers are lower than they were one year ago, they’re still significantly higher than they were earlier this decade.

This consumer confidence has been supported by the growth in our economy.  Accordingly, more people are looking for work and finding jobs, and confident enough to quit a job and find a better one.  Bloomberg Economics reported that 60.9% of the employment population is currently working, which is at a 10-year high.  Yet the size of the labor force could still expand if more workers rejoin the work force and worker participation rates climb back towards the 67% level last seen in 2000 and 2001.

Fourth quarter retail sales are also expected to grow thanks to the Holiday season of November and December.  The National Retail Federation expects Holiday sales for the 2019 season to exceed 2018 levels by approximately 4%.  Others project a 5% growth in Holiday sales.  Such growth would dramatically exceed the 2.1% level recorded in 2018 and be stronger than that seen in three of the last five years.  The National Retail Federation also expects retailers to hire approximately 560,000 people for part-time jobs in the 4th quarter, some of whom may become permanent employees.  This consumer-led economic activity may sustain GDP growth and keep any pending recession at bay.

However, concerns do remain.  Clearly, the global markets have a lot to figure out, from international tariffs to impeachment to Brexit.  But the release of corporate earnings will provide additional input for the markets.  And the Federal Reserve’s Open Market Committee meeting on October 30th may also provide some clarity to the markets.  Moreover, if the U.S. Congress passed a budget for the current fiscal year, that could answer additional questions.  The point is that there are always uncertainties.  At SKY Investment Group, we try to build portfolios to support client needs through thick and thin.  Yes, a portfolio’s value will go up and down, but its cash flow should grow and sustain one’s needs for many years.

Obviously, changes occur rapidly as witnessed by the ever-changing headlines and market gyrations.  For investors, the rhetoric on tariffs, interest rates and our President’s impeachment will likely add to the market’s volatility.  But corporate earnings trends and the economy’s growth also matter, and may in fact be more impactful at driving stock market prices.  Encouragingly, the fundamentals supporting 2/3 of our economy remain very healthy.  Our economy is also significantly bigger with consumer spending 24% larger now than in 2010.  A recent index released by the National Federation of Independent Businesses also showed stable levels of current business activity with a moderate decline in small businesses’ willingness to expand.  This NFIB Small Business Optimism Index also remains at the healthy levels of 2004 and 2005.

Time will tell.  We think the economy will continue to grow, and that any recession is still many months away.  We expect the market’s gyrations to continue, but if economic growth persists, the market will probably climb its wall of worry and trend higher – especially if corporate earnings continue to grow.

Securities noted above valued as of the market close on October 8, 2019: