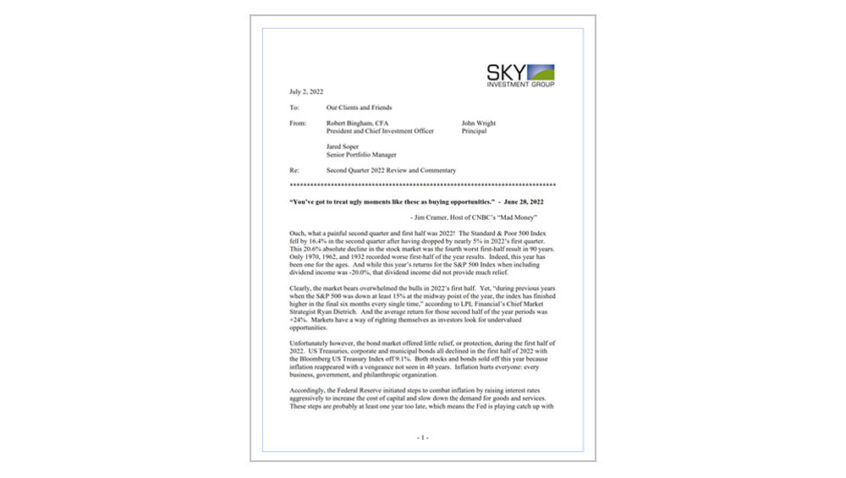 Ouch, what a painful second quarter and first half was 2022! The Standard & Poor 500 Index fell by 16.4% in the second quarter after having dropped by nearly 5% in 2022’s first quarter. This 20.6% absolute decline in the stock market was the fourth worst first-half result in 90 years. Only 1970, 1962, and 1932 recorded worse first-half of the year results. Indeed, this year has been one for the ages. And while this year’s returns for the S&P 500 Index when including dividend income was -20.0%, that dividend income did not provide much relief.

Clearly, the market bears overwhelmed the bulls in 2022’s first half. Yet, “during previous years when the S&P 500 was down at least 15% at the midway point of the year, the index has finished higher in the final six months every single time,” according to LPL Financial’s Chief Market Strategist Ryan Dietrich. And the average return for those second half of the year periods was +24%. Markets have a way of righting themselves as investors look for undervalued opportunities.

Unfortunately however, the bond market offered little relief, or protection, during the first half of 2022. US Treasuries, corporate and municipal bonds all declined in the first half of 2022 with the Bloomberg US Treasury Index off 9.1%. Both stocks and bonds sold off this year because inflation reappeared with a vengeance not seen in 40 years. Inflation hurts everyone: every business, government, and philanthropic organization.

Accordingly, the Federal Reserve initiated steps to combat inflation by raising interest rates aggressively to increase the cost of capital and slow down the demand for goods and services. These steps are probably at least one year too late, which means the Fed is playing catch up with the bond market. The 75-basis point increase in June will therefore most likely be followed by another 75-basis point increase in July, and more increases this fall.

What’s confounding the markets is having to guess as to how aggressive might be the Fed, wondering if this policy will work, and might a recession occur as a result? Some would argue we are already experiencing stagflation after the -1.6% growth in gross domestic product during 2022’s first quarter. Some also predict that GDP was negative in the second quarter, which means we may already be in a recession. Hence, the markets sold off and gave us a bear market. 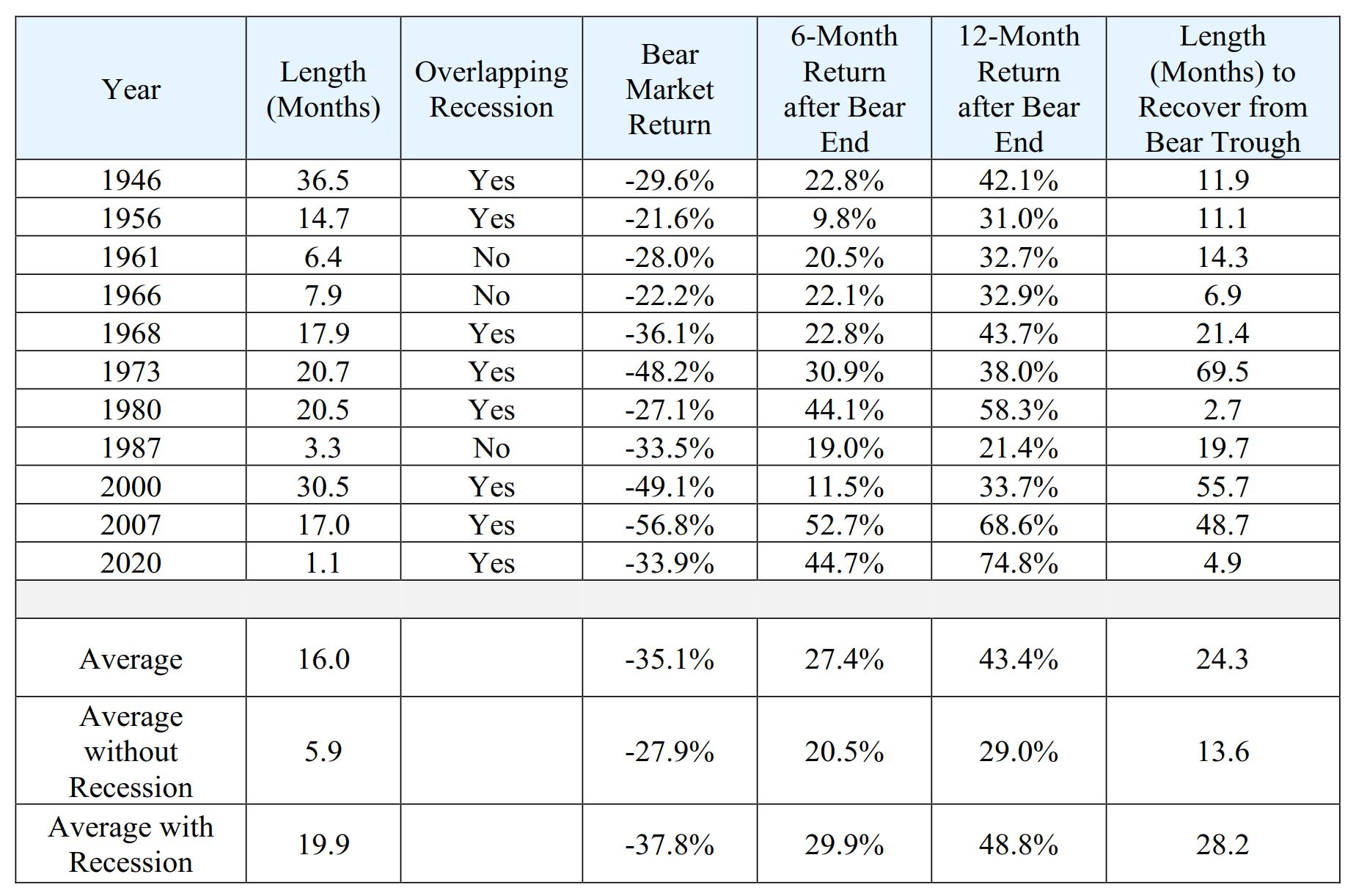 Source: per the Wells Fargo Investment Institute and Bloomberg Data on 6/28/2022

So, will we experience a concurrent recession with today’s bear market? Most analysts believe we will have a recession either this year or in 2023. More importantly, we need to know how severe might be any economic downturn.

We expect that the United States will experience a mild recession, and nothing nearly as severe as in 2008 nor 2000. This opinion reflects the fact that the banking industry today is hugely more solvent and healthier than ever before. Many would argue the industry has excessive capital and is operationally too restricted these days. The best indicator supporting this stance is the recently completed stress tests on the United States’ largest banks.

Every year, the Federal Reserve asks the largest banks to calculate how a hypothetical scenario might impact their earnings and capital strength. And in 2022, this “severely adverse scenario” had unemployment levels jumping to 10%; commercial real estate prices falling by 40%; residential home values falling by 28.5%; stocks falling by 55%; widening corporate bond spreads; and increased volatility in the financial markets. Needless to say, this year’s hypothetical stress test was much tougher than the one in 2021.

While the banking industry would lose money in this scenario, the industry would collectively weather that storm and still be able to make new loans and service customers. Accordingly, the industry passed this year’s stress test and has received regulatory permission to increase dividends, buy back stock, and return some excess capital to shareholders.

In 2008 and 2000, bank industry capital was about one-third the level it is currently. Many sectors of the economy, including the banking industry, were over-extended fifteen years ago, and banks did not have the capacity to extend credit to those in need. Today, that’s not the case. Banks are exceptionally strong and healthy and have ample capital for those looking to borrow. That restrictive ratchet from 2008 and 2000 is not an issue in 2022.

Yes, we may have a recession, but we believe it’s likely to be mild. Countering this opinion is the stance that expectations for corporate earnings are way too high for both the second quarter and the second half of 2022. Yet analysts expect profit margins to hold up well. These positive expectations reflect the premise that most companies have been able to pass along their higher operating costs to customers in the form of higher prices. No doubt, these inflationary pangs have been felt by most of us.

So, July’s news will provide telltale evidence about corporate earnings, the health of the economy, the changing levels of inflation, and how aggressive the Federal Reserve interest rate increases might be this fall. As July began, US Treasuries yields declined to reflect the increasing probability of a recession. More headlines will appear as we hear about the level of durable goods orders, mortgage applications, job growth and unemployment trends. Corporate earnings results and new inflation data will be scrutinized thoroughly.

We expect pending announcements to be both good and bad, which will provide support for both bears and bulls alike. Hence, we expect market volatility to continue for a while. But on balance, we expect the news mix will be slightly more positive than negative, while also supporting the thesis that any economic setback, or recession, will be mild. The chief leading indicator to watch on this front is the labor market, and the pending changes in job growth, unemployment, and worker participation rates. These numbers will probably soften over the next months, but through June, they’ve been exceptionally strong.

Consequently, we do not believe that this is the time to throw in the towel and reduce one’s investment holdings. Rather, we believe investors should embrace the moment, look for opportunities, and think about a future recovery.

To some degree, the economy in the United States is simply getting back to normal; a world where the Federal Reserve is not so omnipresent, and a world where capital costs something to borrow. Having zero percent interest rates is unnatural because nobody should give up their money for free. Hard earned gains should be protected and reinvested so investors receive a rate of return.

Our economy is transitioning back to such a world, and despite the near-term volatility, this transition will improve all our lives. Most companies our clients own have reliable cash flows, predictable sales trends, moderate debt loads, and seasoned management. That combination usually increases earnings one year to the next.

Accordingly, make sure your own cash flow needs are well covered, and grow your assets by saving funds and staying invested. Do please let us know if you would like to visit.