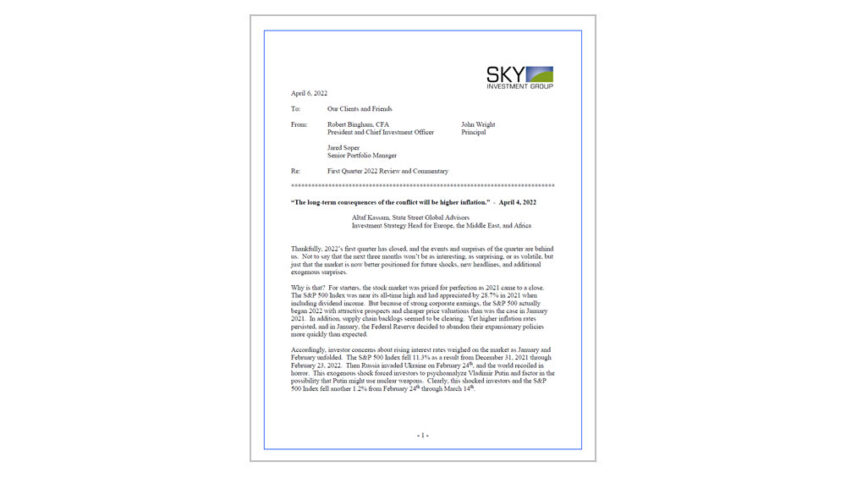 Thankfully, 2022’s first quarter has closed, and the events and surprises of the quarter are behind us.  Not to say that the next three months won’t be as interesting, as surprising, or as volatile, but just that the market is now better positioned for future shocks, new headlines, and additional exogenous surprises.

Why is that?  For starters, the stock market was priced for perfection as 2021 came to a close.  The S&P 500 Index was near its all-time high and had appreciated by 28.7% in 2021 when including dividend income.  But because of strong corporate earnings, the S&P 500 actually began 2022 with attractive prospects and cheaper price valuations than was the case in January 2021.  In addition, supply chain backlogs seemed to be clearing.  Yet higher inflation rates persisted, and in January, the Federal Reserve decided to abandon their expansionary policies more quickly than expected.

Accordingly, investor concerns about rising interest rates weighed on the market as January and February unfolded.  The S&P 500 Index fell 11.3% as a result from December 31, 2021 through February 23, 2022.  Then Russia invaded Ukraine on February 24th, and the world recoiled in horror.  This exogenous shock forced investors to psychoanalyze Vladimir Putin and factor in the possibility that Putin might use nuclear weapons.  Clearly, this shocked investors and the S&P 500 Index fell another 1.2% from February 24th through March 14th.

Markets also became highly focused on rising commodity prices for oil, natural gas, wheat, corn, nickel, and other industrial metals.  As it turns out, Russia and Ukraine have historically supplied about 30% of the world’s wheat exports.  And Russia has traditionally been one of the world’s largest suppliers of fertilizers.  The world’s primary trading pit for nickel also had to shut down for one week to calculate special settlements for over-extended investors.  Trades were broken, margins were called, and markets closed.

Investment markets do not ever typically shut down.  Yet, in March, investors were locked out of two markets: the Moscow Exchange and the international nickel markets on the London Metal Exchange.  The Chinese stock markets also required a bailout from their national government.  These shocks surprised investors, redefined risk, and brought in new regulations and operating procedures.  Notice was served that a market’s liquidity can in fact disappear.

Inflationary pressures also markedly increased across the entire globe.  And when combined with rising interest rates, investors began to fret about stagflation reappearing.  Markets suddenly had to price in the prospect of slowing economic growth, greater inflation, higher interest rates, war, and a new world order.  That the market priced in much of this change in just several weeks’ time was quite remarkable.

Accordingly, markets recovered a bit later in March leaving the S&P 500 Index down by 4.6% for the first quarter when including income from dividends.  But with rising interest rates, bond markets also fell in the first quarter and Bloomberg’s US Treasury Index declined 5.6%.  So, safe havens were hard to find.  Energy stocks obviously did well as oil prices increased 38% in the first quarter after their 50% increase in 2021, as measured by prices for Brent crude. 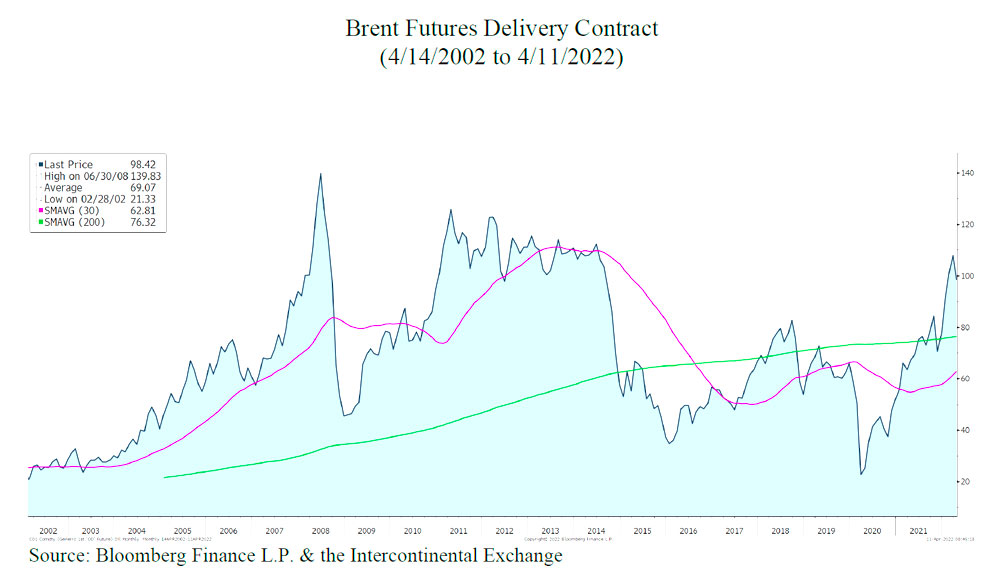 But oil prices are still lower than they were in July of 2008, and as a percent of American consumption, food & energy expenditures have fallen to 12% from the 27% level experienced back in 1973, per Numera Analytics.  With renewed steps to encourage energy exploration and production, governments could further reduce Putin’s influence in the world.

America will also be less directly impacted by the Ukrainian war and its sanctions than Europe and many other countries.  Coca-Cola, McDonalds, Exxon, Shell, Diageo, IBM, and Netflix are but a few of the many companies negatively impacted by the world’s withdrawal from Russia.  But as a percent of sales, Russian revenue was less than 5% of total revenue for many of the approximately 400 companies that withdrew from Russia.

Favorable earnings results are also anticipated for most companies during April and May.  Investors will gain more insights on operating trends, earnings pressures, and profit margins once these earnings are released.  As mentioned in our January Commentary, profit margins for the S&P 500 companies have increased dramatically over the last thirty years.  In 2021, the operating profit margin for these companies was 12.6% versus an annual average of 7.8% for those companies going back to the early 1990’s, per S&P Global.  Greater automation and higher rates of productivity have helped drive those trends.

But clearly, inflationary pressures and supply chain constraints are likely to reduce profit margins here in the first quarter and throughout 2022.  Some 13% of the S&P 500 companies had issued an earnings warning for their first quarter results as of March 31st.  So, investors have at least partially marked down expectations for investment returns here in 2022.  We’ll have to wait and see how the chips fall, but some positive surprises could readily improve investor sentiment.

LPL Financial Chief Market Strategist Ryan Detrick noted that, “April not only is the best month on average since 1950 for the stock market, but it has also been higher an incredible 15 of the past 16 years as well.”  Bespoke Investment Group also pointed out that, ”with just three down Aprils over the past 20 years, no other month during this period has been more consistent to the upside.”

However, the Federal Reserve’s next meeting does loom on the horizon with its May 3rd & 4th dates.  Many analysts believe the Fed will raise the interest rate for their Federal Funds rate by 50 basis points at that meeting.  Such an increase would be twice the 25 basis point increase seen on March 16th.  Futures markets on March 31st had priced in a 76% probability of a 50 basis point increase in May.  Again, markets are expecting that increase and have been pricing that change into valuations.  Future events and the strength of corporate earnings will dictate the market’s trends and its level of volatility.  Yes, the markets could bounce around, but then, that is what they are supposed to do.

With time, all these cross currents will become clearer and better understood.  Yet meanwhile in the first quarter, many of the firm’s core holdings increased their dividend payouts, some in excess of 10%.  That’s a nice increase, and a healthy improvement to our clients’ cash flow; a tangible benefit for weathering the storm.

Hence, we continue to invest in best-in-class companies that are results-driven.  Successful companies will generate ample cash flow and have an ability to adapt to change.  Market uncertainties will persist, but corporate earnings will set the tone.  As questions arise, do please let us know, so we can move through 2022 together.

All our best, and a Happy Spring to each of you!

Securities noted above valued as of the market close on April 6, 2022: